The crisis told in art 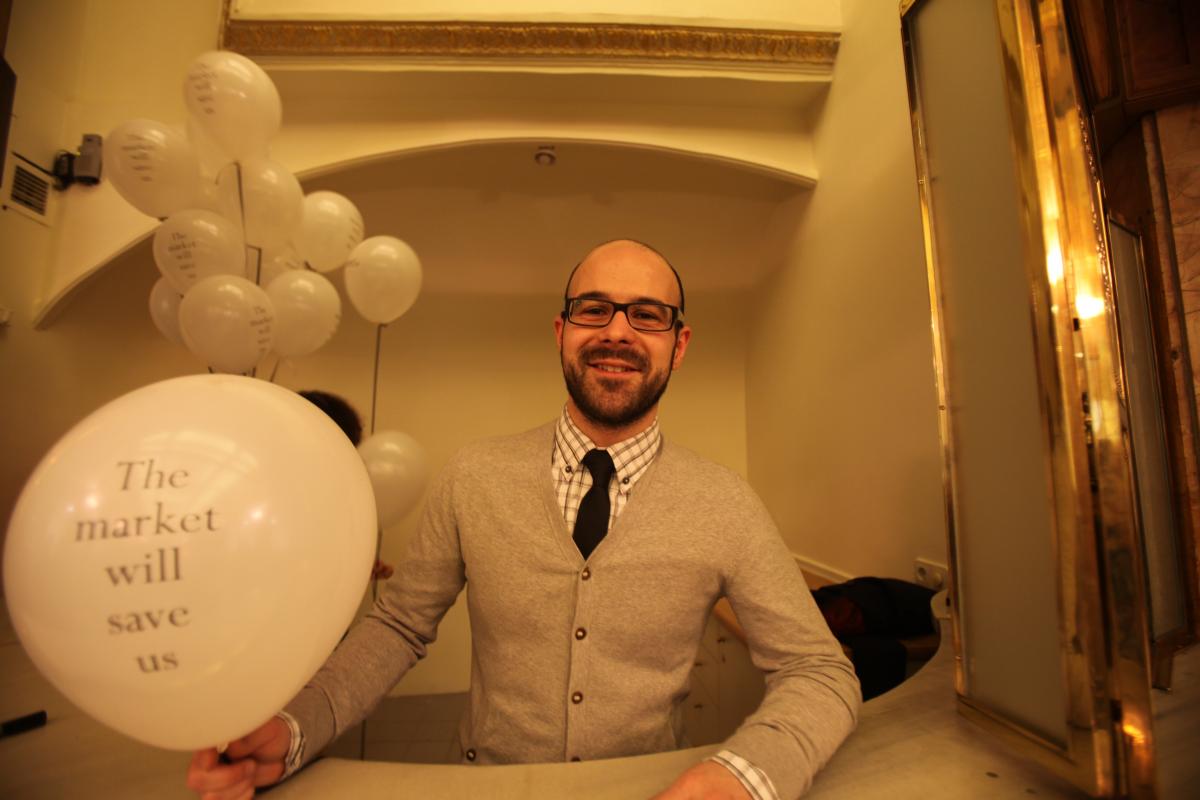 Named one of the four most promising artists of the world, Greek artist Bill Balaskas opens his first personal exhibition in Turkey at the Sabancı University Kasa Galeri.

Exhibits at the Kasa Galeri include selections from the artist’s work inspired by the economic crisis in Greece to the installation Monopoly created specifically for the Kasa Galeri exhibition space.

The exhibition at Kasa Galeri is the extension of the artist’s work on the Royal College of Art in London.  Situated next to the Royal Albert Hall, the historical landmark is draped in a 23-meter artistic banner reading The market will save us.

Greek artist Bill Balaskas studied economics before taking up art education in London.  The artist’s recent focus includes works that investigate into the nature of capitalism and global economic crisis.  Video art and installations by Bill Balaskas have been featured in many important international exhibitions and have received critical acclaim.  The artist’s first personal exhibition in Istanbul was inspired by his work on the façade of the Royal College of Art, and the theme as explained by the exhibition title, The Market Will Save the World, is particularly appropriate to Kasa Galeri, which is an old bank vault.

The exhibition at Kasa Galeri opened in the evening of January 25th with a performance by the artist.  Balaskas autographed 100 helium balloons reading “The market will save us” and tied these to the wrists of 100 people attending the opening cocktail.  The lading artists of Turkey, including Komet, attended the opening event along with a number of visitors.

The Market Will Save the World exhibition at Kasa Galeri is held in association with the Royal College of Art, Kalfayan Galleries (Athens-Thessaloniki) and the Museum of Contemporary Cuts (MoCC).

About the artist
Bill Balaskas (Thessaloniki, Greece, 1983) lives and works in London. The artist holds an MA degree in Communication Art & Design from the Royal College of Art, and is currently pursuing a doctorate degree at the same institution in Critical Writing in Art & Design.  He has an undergraduate degree in Video Arts Production from the Maidstone University for the Creative Arts, UK (2008) and a degree in Economics from the Aristotle University of Thessaloniki (2004).  The artist’s most recent exhibitions are Sabancı University Kasa Galeri, Istanbul (2013); New Positions (Art Cologne), Cologne (2013); Kalfayan Galleries, Athens (2012); Institut Français de Thessalonique, Thessaloniki (2011); Jewish Museum, London (2010); Sketch Gallery, London (2010).  The artist represented the UK in Maribor 2012 European Capital of Culture, and is a Guest Editor of special printed and online issue of the Leonardo Electronic Almanac (LEA), The MIT Press.  Bill Balaskas won the ALICE People’s Voice Award for the most important emerging artist around the world in April 2012, and is nominated for the AUDI Art Award for New Positions (Art Cologne, Cologne, Germany), 2013.  Bill Balaskas is represented by Kalfayan Galleries (Athens-Thessaloniki).  For high-resolution images of the artist’s work, contact info@kalfayangalleries.com