The new exhibition titled “Buluşma…Reunion” brings together the works of 20 artists whose paths have crossed with the Sabancı University Visual Arts and Visual Communication Design Program, displaying a range of works from various disciplines such as painting to photography, documentary and installation. The exhibition will be open to art enthusiasts between the dates of April 9, 2015 – July 26, 2015.

Sabancı University Sakıp Sabancı Museum (SSM) is preparing to host the new exhibition titled “Buluşma…Reunion”, bringing together the works produced by 20 artist graduates of the Sabancı University Visual Arts and Visual Communication Design Program in many disciplines from painting to photography, documentary and installation.

The details of the exhibition were announced during a press conference on April 8, 2015, Wednesday, with the attendance of SSM Director Dr. Nazan Ölçer, President of the Sabancı University A. Nihat Berker and Erdağ Aksel, Faculty Member at the Sabancı University Faculty of Arts and Social Sciences. “Buluşma…Reunion” brings together the works of 20 artists whose paths have crossed with the Sabancı University Visual Arts and Visual Communication Design Program, and who now work as professional artists, gaining prominence in international biennales, expositions and exhibitions, on the 15th anniversary of the program’s first course. These 20 artist graduates produce works in many different mediums but distinguish themselves in their common determination to produce in the art world where maintaining permanence and continuity is a constant challenge and come together at this exhibition for the first time.

The 40 artworks by 20 artists were selected by a committee including notable names in the international art world today such as the Exhibitions Secretary of the Royal Academy of Arts (1977-2008) Sir Norman Rosenthal, Director of l'Ecole Nationale Supérieure Des Beaux-Arts (2000-2011) Henry-Claude Cousseau and art historian, curator and critic Deepak Ananth, who also serve as the International Board Members of SSM, along with Dr. Nazan Ölçer, Director of Sakıp Sabancı Museum and Erdağ Aksal, Sabancı University Arts and Social Sciences Faculty Member Erdağ Aksel.

During the “Buluşma…Reunion” press conference Dr. Nazan Ölçer addressed the audience, saying, “These professional artists who have found their own artistic path come together at the “Buluşma…Reunion” exhibition for the first time, at the Sakıp Sabancı Museum. Exhibitions are among the most powerful ways of communicating with the society, and they are invaluable in providing the opportunity for artists to showcase their works and take bold steps in forming their personal languages. I firmly believe that this exhibition hosted by Sakıp Sabancı Museum will resound with its youth and energy.”

The President of the Sabancı University Prof. Dr. A. Nihat Berker expressed his happiness and excitement about the “Buluşma…Reunion” exhibition, saying “The cause of my elation is seeing that Sakıp Sabancı Museum will be hosting the works of our young artists in the same halls that previously hosted such world-renowned artists as Picasso, Dali, Rembrandt, Rodin, Anish Kapoor and Miro.” Prof. Dr. Berker also said, “As the Sabancı University, we are extremely proud to see that these young artists are moving further in their art careers with determination. I am certain that they will gain international acclaim in the future.”

Erdağ Aksel, Faculty Member at the Sabancı University Faculty of Arts and Social Sciences, addressed the audience during the press conference and said, “Sabancı University was founded at the end of a long process that started with Güler Sabancı’s challenge to a group of academicians to ‘imagine the university that your heart desires.’ Today, we are happily seeing the fruits of this revolutionary program.”

As part of the “Buluşma… Reunion” exhibition, which will be open between the dates of April 9 and July 26, 2015, works by the Sabancı University Visual Arts and Visual Communication Program graduates Aslı Narin, Baptiste Croze, Berke Soyuer, Beyza Boyacıoğlu, Burcu Yağcıoğlu, Cemre Yeşil, Deniz Gül, Deniz Üster, Ege Kanar, Egemen Demirci, Elif Süsler, Erdem Taşdelen, Hasan Salih Ay, Hayal Pozantı, İz Öztat, Julia Kul, Onur Ceritoğlu, Tan Mavitan and Meriç Algün Ringborg, who was recently invited to be a part of the 56. Venice Biennale will be exhibited alongside two works by sculptor Bayram Candan, who continued his art practice in the metal studio at the Sabancı University until his untimely passing in 2013.

Panel conferences with the attendance of artists and Sabancı University alumni who currently work in the fields of art theory and criticism and who also contributed to the exhibition catalogue with their articles, will also be organized in conjunction with the exhibition. The first of the series of panels will take place on April 11, 2015, Saturday.

In the Children’s Education Programs designed parallel to the “Buluşma…Reunion” exhibition, children will explore questions regarding contemporary art and partake in a creative process that will help them delve into the questions that arise in the artist’s mind. Throughout the exhibition, children will add their artistic output to an ever-growing installation, a thought map.

A scholarship fund within Sabancı University was created as part of the “Buluşma…Reunion” project with the contributions of Enka Vakfı, Garanti Bankası, Kibar Holding, Milliyet Gazetesi, Mitsubishi, Polimeks Holding, Sabancı Holding, Samsung ve Umur Matbaa along with many personal contributions, to be used on the education of the Sabancı University Visual Arts and Visual Communication Program students.

For the duration of “Buluşma…Reunion”, all students will be able to visit the exhibition free of charge. 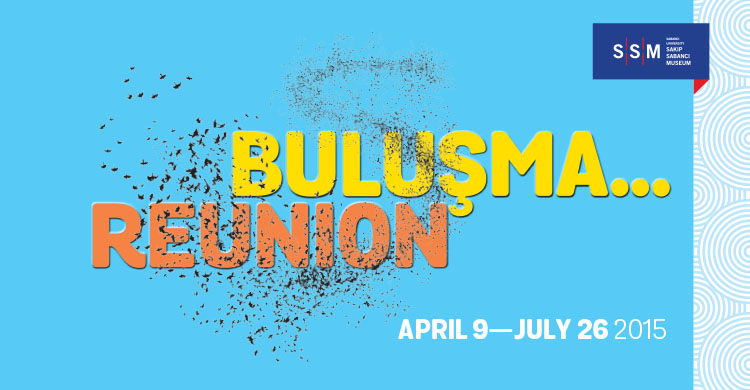