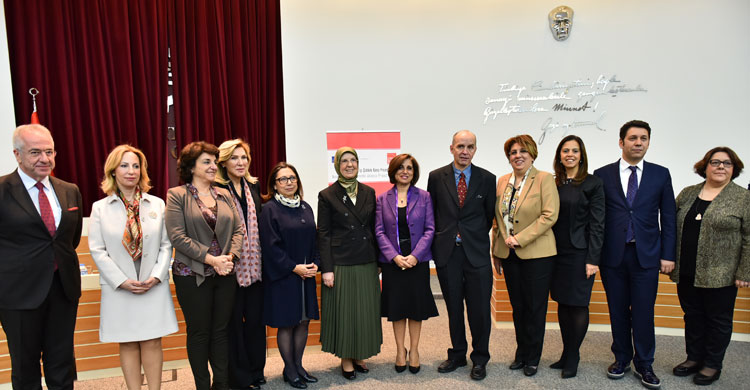 A conference was held on Tuesday, December 15, 2015 to reveal and introduce a guide issued by the Sabancı University Corporate Governance Forum to help businesses act against violence suffered by their woman employees in their personal relationships. Dr. Sema Ramazanoğlu, Turkish Minister of Family and Social Policy, spoke in the conference for introducing the guide developed in partnership with TÜSİAD and the support of the UN Population Fund and Sabancı Foundation.

The guide developed in partnership with TÜSİAD and the support of the UN Population Fund and Sabancı Foundation, and revealed on Tuesday, December 15, 2015 at the Istanbul Chamber of Industry Assembly Hall. 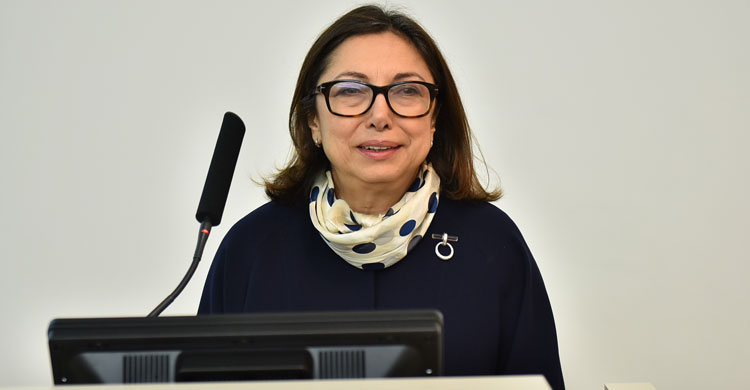 Introductory remarks were followed by a panel discussion moderated by TÜSİAD Gender Equality Working Group President Nur Ger. The guide was presented by Sabancı University Corporate Governance Forum Director Melsa Ararat. Further information was given about the implementation of the guide and best practices discussed in the document.

Zero tolerance for violence is critical both in legislation and implementation

TÜSİAD Chairperson Cansen Başaran Symes argued that legislation on violence against women must contain deterring sanctions and "zero tolerance of violence" must be reflected both on the legislation and its implementation.

Symes explained that, according to a global survey, 30% of the woman population, or 723 million women, were victims of violence, and according to a study by the Ministry of Family and Social Policy and Hacettepe University, 4 out of 10 women in Turkey suffer physical or sexual violence from their partners at one point in their lives, and one out of four women are victims of economic violence. Symes mentioned child marriages and the issues caused by this practice.

Symes said that the vicious circle which makes women insecure and vulnerable to violence in the society must be thoroughly disintegrated, continuing "Legal protection against violence to women and the proper implementation of laws has been a part of government programs and important steps have been taken recently. But we also know that unless everything written in legislation fully adopted by people, it is very difficult to put it in practice."

Symes said that Turkey was the first country to sign and ratify the Council of Europe Convention on preventing domestic violence and violence against women, which brought great responsibility.

"Özgecan Aslan became a symbol that united the society"

Cansen Başaran-Symes explained that steps towards including gender equality in school curricula, combating child marriages, measures to protect against violence, counseling services, woman-friendly cities, and initiatives to empower women in education, professional life and the society were all parts of the solution.

Expressing her belief that public authorities, the private sector and nongovernmental organizations need to unite in a stance for preventing violence against women and protecting sufferers of violence, Symes said that everyone must work in their respective fields to support permanent and sustainable projects.

Discussing the murder of Özgecan Aslan, Symes continued: "Having departed life in a shattering tragedy this year, Özgecan Aslan became a symbol that united the society against violence towards women. As TÜSİAD, we decided to take responsibility and do our part by supporting the 'Business Against Domestic Violence' project initiated previously by the Sabancı University Corporate Governance Forum. This is where businesses, and not the government, have a major part to play. We at TÜSİAD firmly believe that 'Violence Against Women' must absolutely be a subchapter of all corporate policies."

"The Guide is a resource for making corporate policy"

Symes emphasized the Business Against Domestic Violence Policy Development and Implementation Guide as a resource for companies when developing corporate policies.

Symes also mentioned that TÜSİAD would provide strong support for the recognition and implementation of the guide, undertake efforts to ensure that all TÜSİAD members adopt the guide and that they have secured the support of TÜRKONFED for the dissemination and adoption of the guide across companies in Anatolia.  Symes explained that they would conduct information meetings with companies in 2016 and share the progress and the experiences of the companies that chose to adopt the guide in December of the same year.

Remarking on gender inequality in the workforce, among other instances of gender inequality in life, Kulessa said “The participation of women in the workforce is 30% while in men this is 70% (TÜİK workforce statistics, 2015). Unemployment among men is 9.7% while unemployment among women is 13%: One of the reasons why women find so little representation in the labor market is the possibility of encountering gender-based violence in the workplace."

Karl Kulessa explained that violence against women as a byproduct of gender equality was a prevalent issue in Turkey as it was worldwide. Referring to the "Business Against Domestic Violence" survey, Kulessa said that women were being subjected to physical, psychological and economic violence regardless of their status in the workforce. He noted that the situation was exacerbated by cultural norms, the fear of losing their jobs as well as embarrassment, while the lack of support mechanisms to utilize in the case of violence did not help the situation.

Kulessa concluded, “We hope that this guide will assist companies that want to create violence-free workplaces. The UN Population Fund will continue to support this and all other initiatives that combat gender-based violence in the workplace."

Women must be supported with affirmative action in all areas

Turkish Minister of Family and Social Policy Sema Ramazanoğlu told the story of how she took up politics. Minister Ramazanoğlu said, “Back then, I was a general practitioner where my experiences had led me to question what was happening about women in Turkey. I told myself that besides serving the community as a physician, there was lots to do for women and girls. I then became a specialist and I was assigned by the Ministry of Health to work in various hospitals around the country. I realized that I needed to do more than medical practice, and I began working in nongovernmental organizations. These were NGOs that did joint work on health and women's issues. I was treating patients and fulfilling my social responsibilities in NGOs when certain turn of events became signs to me that women must also be involved in politics in Turkey. That is when I realized that more action needed to be taken for women and girls in this society. Politics is the sphere where one can be the most active. As a result, I became a founder of the Justice and Development Party fifteen years ago."

Minister Ramazanoğlu pointed out three main causes of violence: "First are sociological and cultural reasons; second are legal and economic reasons; and third is the role given to women by the society. From the sociological perspective, the regard of women must be improved and women must be brought to the foreground with their achievements in social life, economics, politics and law, much like men always are. With respect to culture, women must be viewed in a different way, the position of women in our culture must be accurately explained, and wrong opinions or knowledge must be set right. Legally, women have been neglected and cast out of economic and social life in many societies. This later became the main reason why those societies remained economically and culturally backward. As regards economic rights, women in male-dominant societies are severely disadvantaged as they are excluded from professional life. We need ongoing political and economic support to advance women's education, improve their job skills, help them raise children, and be a part of professional life. It must be kept in mind that a woman is a mother above all. This is exactly why women must be supported with affirmative action in all areas - legal, economic, social and cultural."

Common language against violence is critical

Sema Ramazanoğlu argued that the cultural values of societies revealed their regard of women, continuing “At a time when there is unprecedented interaction between cultures, it is critical to build a common language against violence. Our culture and tradition, our moral and religious values, our regard of the human and the society reject violence of all kinds. The fact that violence is still a great obstacle for women in business despite all of this reveals that we are facing a serious issue.

Sema Ramazanoğlu said, "Together, we started a new era in the protection of the family and the prevention of violence against women. We adopted a policy of "zero tolerance" in sanctions, and made Constitutional amendments that reinforce the economic and social status of women. The CEDAW Convention became the prevailing document above national regulations. Provisions which ensure that all acts of sexual harassment and sexual assault will be punished serve to protect working women. We are carefully monitoring the statistics. The data shows us the way and bears strategic importance for generating solutions. We are also conducting scientific research on the matter, evaluating results, and taking the required steps."

Introductory remarks were followed by presentations of new implementation and best practices led by TÜSİAD Gender Equality Working Group President Nur Ger.  Sabancı University Corporate Governance Forum Director Melsa Ararat presented the "Business Against Domestic Violence Policy Development and Implementation Guide."  Melsa Ararat said that employers have questions about the legal framework of the issue due to violence being qualified as "domestic."  The Guide summarizes the legal framework as follows: "Laws and legislation provide all the legal grounds for adopting measures that will prevent domestic violence and protect victims of domestic violence, in reference to both the diligence and loyalty obligations of company directors, and to compliance with corporate governance principles.  In addition to practices that are required and supported by laws and legislation and apply to affiliates and subsidiaries, companies may develop projects that extend beyond the boundaries of the company as part of their social responsibility efforts."

The foreword to the guide was written by TÜSİAD Chairperson Cansen Başaran Symes and UNFPA Turkey Representative and Armenia, Azerbaijan and Georgia Regional Director Karl Kulessa.

• The guide focuses on the violence suffered by women in personal relationships, either currently or in the past, and its impact on work and the workplace.
• The guide includes details on how to create a corporate policy to combat violence against women, and provides sample policies for adoption or adaptation by companies.
• The best practices section summarizes policies and efforts of companies in Turkey and abroad regarding their work in violence against women.
• The guide includes steps, tools and methods, and successful implementation examples from companies that have adopted gender equality as a workplace principle, which will provide input to policies and procedures which will ensure that employees and the workplace is affected by domestic violence against women at a minimal level.
• The guide also refers to projects which seek to contribute to the social struggle against violence and are implemented by companies as part of their social responsibility efforts.