Report On Cıtızenshıp In Turkey And The World 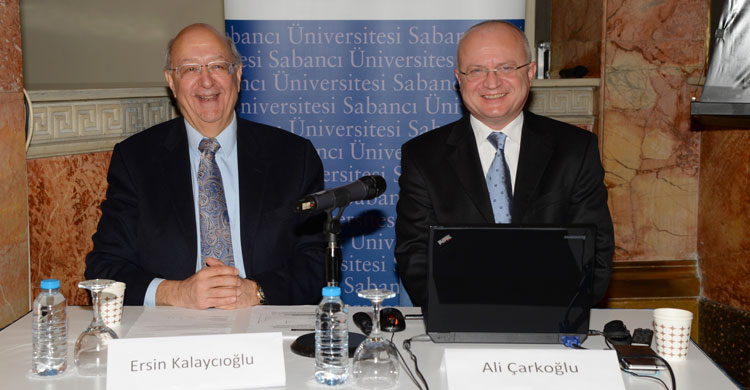 The ISSP 2014 field survey was conducted between February 13th and April 6th, 2015 with face-to-face interviews with 1509 respondents in 58 provinces. A press conference was held to share findings on citizenship in Turkey, the perception of relationships between the individual and the state, and the attitudes and expectations regarding these.

Implemented in 43 countries, the survey in Turkey sought to define citizenship and answer questions related to paying taxes, obeying laws, tolerance of differences, support for elections, and solidarity.  A presentation of the report “Citizenship in Turkey and the World” and an analysis of findings were given by Professor Ali Çarkoğlu and Professor Ersin Kalaycıoğlu. The key conclusion of the report can be summarized as follows:

The definition of a "good citizen of democracy" in Turkey, in the own words and views of the citizens (respondents) seemed to consist of:

1. Paying special care to take part in the elections,

3. Seeking to live according to the law,

4. Being tolerant of ethical values and differences,

5. Finding it important to aid others in worse financial situation.

A closer look at political participation, one of the key reflections of the notion of citizenship on politics, reveals a situation vastly different from such consolidated democracies covered in the ISSP surveys as the United States, UK, Switzerland and Scandinavia. The tendency to take part in petitioning, rallies, assemblies, and demonstrations, which define the content of more direct and unconventional political participation, is very low.

A tremendous majority also avoids ways of conventional political participation such as contacting public officials in Turkey, where the behavior that is considered the most congruent with the attitudes summarized above is voting. Among conventional ways of political participation, participation in national, local, Presidential elections is the most prevalent in Turkey, and other ways are significantly less popular compared to consolidated democracies cited above.

Considering social contacts and involvement, there seems to be little interaction among individuals.  These findings correlate to the shallowness of trust-based relationships, and point out that citizenship in Turkey has a very limited capacity of forming social networks and interaction-based partnerships in order to accumulate social capital. As a result, associatiability and establishing partnerships are difficult and such initiatives are short-lived. This leads to a dearth of social capital which prevents political participation from being effective and makes voting the only means of mass participation in Turkish politics.

An interesting point is that although political involvement is largely limited to consistently voting in elections, the feeling of political efficacy in Turkish citizens is remarkably high and on par with that in consolidated democracies. Given the lack of citizen-politician interaction at a level of diversity and effectiveness that would explain the presence of such a feeling, the report argues that the feeling is there because of constant media focus on election results, romanticizing them as the "national will." Otherwise, it is noted that data that may correspond to the belief that an unfair law could be repealed as a result of an initiative started by a citizen is mostly nonexistent, and there are few respondents who state that such a thing could be possible.

Another key finding in the report is that the number of Turkish respondents who believe that politicians favor their personal interests over public benefit is proportionally greater in Turkey than the respondents in the majority of ISSP member countries. At a time when there is heated debate about corruption issues in Turkey, such responses reveal that these debates do not receive special consideration. This percentage is also low in Brazil, Bulgaria, South Africa, Hungary and Russia, which may indicate that the question does not simply measure the trust in politicians. An interesting contradiction is that the proportion of citizens who believe that politicians only work for their personal gain is higher in Nordic countries, United States, UK, Switzerland, Western Germany, Canada and Australia, where allegations of corruption in politics is relatively less, than the proportion in Turkey and similar countries.  This may be further evidence of a decline in trust of elected officials as the principal actors of representative democracy, even in nations with consolidated democracies. From the perspective of the Turkish citizens who attach great importance to elections, the trust in and regard of administration by officials that are elected as a result are not as low as the levels seen in the UK, Switzerland, France and United States.

Citizen opinion of the overall effectiveness of democracy reveals a very different view. In Turkey, the number of citizens who believe that the democracy works well is almost equal to those who believe that democracy does not work well (both around 40% of the population).  There is significant improvement (9%) in this perception compared to a decade ago. Nevertheless, not much change can be expected in this indicator when compared to expectations about whether the democracy will be better or worse in ten years. It is fairly obvious that the democracy is not perceived as working very well in Turkey in contrast to ISSP member nations and consolidated democracies in particular. Therefore it should come as no surprise if demands are voiced to improve the quality of democracy in Turkey over the next decade.