•    The curse of terrorism threatens globally. We can eliminate this calamity by respecting different beliefs and thoughts and promoting unifying values rather than discrimination.
•    Love for humans and patriotism can be nourished if unity, solidarity and fraternity are ensured.
•    You may sometimes be left with difficult choices. “Universal values should be the star that guides you!”
•    Sabancı Family have always thought that development of Turkey cannot be reduced to just economic development.  We believed in the social development to the same degree. Sabancı University is based on this approach.
•    Future will be different and fast. But self-improvement will remain as a key to success.

Güler Sabancı also gave life advice to new graduates. She advised them to continue learning, be sure of themselves, never give up and work hard while keeping up with the pace of life. 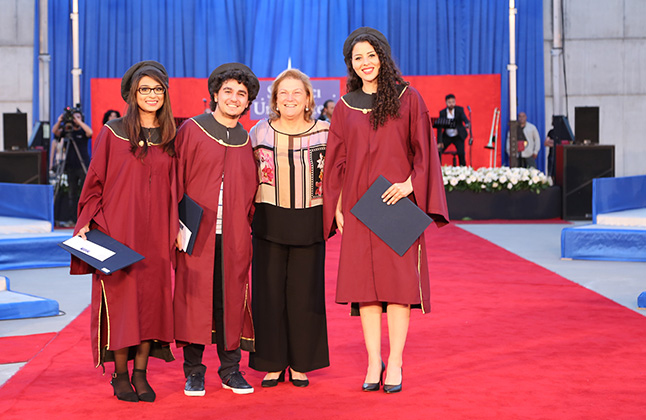 The 17th graduate and 14th undergraduate classes of Sabancı University received their diplomas at the commencement ceremony held on Saturday, June 18th. The ceremony was held on campus in Tuzla with more than five thousand guests. The top-ranking students of the three faculties received their awards during the ceremony. Valedictorians were Barza Nisar in the Faculty of Engineering and Natural Sciences, Mehmet Oğuz Gök in the Faculty of Arts and Social Sciences, and Melis Maravent in the School of Management. 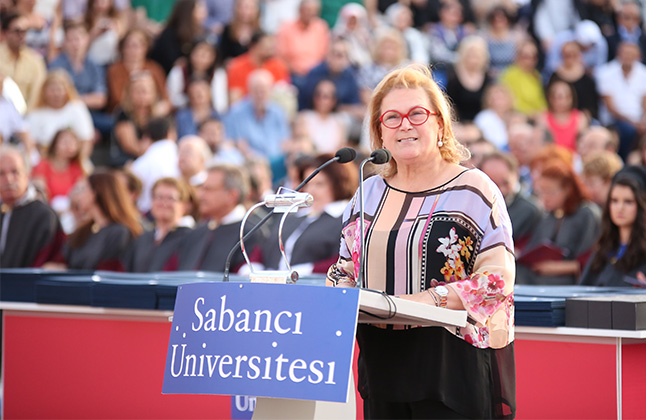 Paying tribute to Sakıp Sabancı, Güler Sabancı said, “With mercy and gratitude, I would like to commemorate our Honorary President Sakıp Sabancı, the constructive, positive and pioneering figure who was dedicated to tolerance above all, and wholeheartedly believed that a well-educated youth is the only way to ensure a better future for Turkey.

Terzioğlu made great contributions
Güler Sabancı remembered Professor Tosun Terzioğlu, the late Founding President of Sabancı University who passed away last February. She said, “He accepted to be the founding president of a university that was not established yet, quitting his service in TÜBİTAK (Scientific and Technological Research Council of Turkey). Terzioğlu was personally involved in the creation of a commencement etiquette, from sugar candy, trees in the campus and presenting a brick to the contributors to our cap and gown code”.

Speaking of Terzioğlu’s remarks on commencement dress designs, Güler Sabancı said: “Since the oldest universities in the world are established in North England, all academic dresses are designed on North England style, where the weather is cold. But Turkey is a Mediterranean country. As our commencement ceremonies are held in June, our gowns have to be lightweight and thin. I remembered his remarks on my way to this ceremony.” “Like Terzioğlu remarked, we have to base our actions on knowledge and be ready to change depending on actual needs and conditions rather than acting blindly and imitating,” said Güler Sabancı, continuing her words.

Underscoring that Terzioğlu delivered all his knowledge and experience in the cause of founding “A Happy University”, Güler Sabancı mentioned that Terzioğlu worked with Nihat Berker for 6 months before handing over the chair, a handover ceremony “exemplary” for future generations.

Güler Sabancı expressed that they sacrifice themselves to deliver the possible, and thanked families of the graduates for their endless trust and support.

We became a university that made a difference in higher education in Turkey
Speaking to the alumni, Güler Sabancı said that President Nihat Berker and faculties made every effort to train environmentally- and socially-conscious, people-oriented individuals. “They delivered skills, experience and self-confidence while broad-mindedly encouraging them. I would like to thank them for familiarizing our students with the habit of questioning, and their contributions to the universal science,” said Güler Sabancı.

Explaining that they chose to create a new and unique model that was not a reiteration of existing university models, Güler Sabancı continued, “Now we are dreaming of decades to come. We are happy to welcome contributions of our alumni to this new planning process. We are planning future of our institution with our collaborative and constructive vision that values different voices ahead of time”.

Quoting from the President of Columbia University, “our values are alike, which will lead to a successful partnership,” said Güler Sabancı and added: “I find outstanding the fact that Columbia University as a deep-rooted institution shares “the same universal values” with a university at its twenties, and my confidence in the future increases”.

Distinguished alumni of Sabancı University
Güler Sabancı also spoke of success stories of SU alumni. She told that SU alumni are carrying out doctorate studies at leading universities around the world. She mentioned that SU alumni take up executive positions at leading international organizations while SU entrepreneurs take active role in local and global economy as heads of their start-ups thinking outside the box.

Emphasizing that Sabancı University has been ranking first in the creativity and entrepreneurship index by the Ministry of Science, Industry and Technology for four years, Güler Sabancı said, “We are endeavoring to maintain our position as the top institution. Our efforts will give better results anytime soon.”

Life lessons from Güler Sabancı
Before concluding her speech, Güler Sabancı gave life advice to new graduates including 8000 others. She said that SU alumni are well-trained to pace up with the era of digitalization and technology with a quality education.

“Future will be different and fast, but self-improvement will remain as a key to success,” said Güler Sabancı and advised graduates to make effort to know themselves well.

Güler Sabancı named alumni as the stars shining upon our future, and said, “We believe your achievements will spread all around the world,” concluding her speech.

Our alumni are all around the world 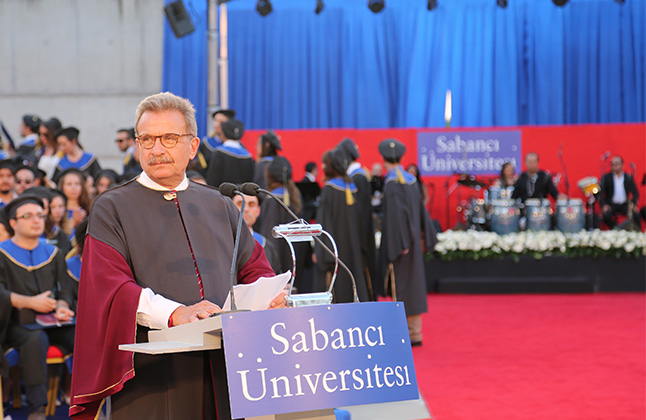 “Human factor makes organizations valuable and active.  Students add energy, dynamism and trueness to universities and schools. Your outstandingly fresh, new and interrogative soul enables us to stay young, energetic and challenging; you are the Pilates for our minds and spirit.  We trusted you from day one, being the first Turkish university to give you the flexibility to create a program with classes of your choice. We have recently initiated the richest joint degree program in Turkey by developing 45 different dual programs. You will have the chance to observe the initial results in a few minutes –only if I conclude my speech. Our alumni are engaging in creative and entrepreneurial activities all around the world, pushing the limits of their comfort limits with great pleasure, and they succeed. Our alumni are all around the world: a breakthrough in treatment of Parkinson’s and Alzheimer’s diseases at Harvard University; solo art exhibition in New York; entrepreneurship in the Silicon Valley, California; Michelin starred chefs in Miami and provision of various types of bread to lux hotels in Istanbul; attendance to Venice Biennale; establishment of companies in Hong Kong; bike ride to the Himalayas; social entrepreneurship in Cambodia, Thailand, Japan and other South-Eastern Asia countries; entrepreneurship in China; New Zealand National Contemporary Art Award, and more. We are internationally engaged in more collaborative efforts. In addition to the Sakıp Sabancı Chair and Center for Turkish Studies at Columbia University, we have partnered with Columbia Business School for our Executive MBA program to improve SU School of Management. We have developed strong collaborative relationships with MIT and Harvard. Every year, MIT and Sabancı University exchanges their top 8 students for 20 course hours,” said President of Sabancı University Professor Nihat Berker during his commencement speech.

Gürsel Sönmez Awards given
Endowed in the memory of the late Gürsel Sönmez, a Sabancı University faculty member who passed away in 2006, the Dr. Gürsel Sönmez Research Awards were presented at the commencement ceremony. Winners were Beyza Vuruşaner Aktaş, Nima Tofighi, and Jamal Sayyed Monfared Zanjani.

The hat-toss was followed by a dance show and live music by Ayhan Sicimoğlu. Sabancı University Board of Trustees Chair Güler Sabancı joined the dance to share the excitement of graduation with the students.