‘The Russian Avant-garde. Dreaming the Future through Art and Design’ 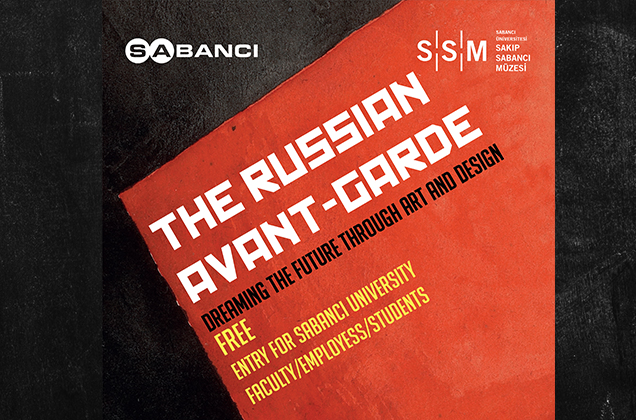 Sabancı University Sakıp Sabancı Museum opens the exhibition ‘The Russian Avant-garde. Dreaming the Future through Art and Design’ sponsored by Sabancı Holding on 18 October 2018, open until 1 April 2019, featuring a comprehensive anthology of the Russian Avant-Garde.

The exhibition is co-curated by Dr. Nazan Ölçer Head of Sakıp Sabancı Museum and Dr. Maria Tsantsanoglou, Head of the George Costakis Collection at State Museum of Contemporary Art, Thessaloniki, and besides the Costakis Collection it contains a selection of 513 works from Moscow’s All-Russian Museum of Decorative Arts and Multimedia Art Museum and works from leading private collections in Europe shown together for the first time thus shedding a light upon the important place Russian Avant-Garde occupied in the history of art.

Sakıp Sabancı Museum is a part of Sabancı University and this exhibition that focuses on one of the most exciting periods of 20th century art history aims to fulfil its academic mission by presenting the political strata behind the Russian Avant-garde in such a way as to provide a source. The exhibition represents the fertile productivity of the entire period and the activities of the artists and the schools that aimed to spread their art to every aspect of life with a selection including paintings, design, literature, film and theatre.

The ‘The Russian Avant-garde. Dreaming the Future through Art and Design’ exhibition does not only focus on the dramatic changes and radical developments that happened during first quarter of the 20th century and prepared the groundwork for intellectual and artistic progress, not just within the Russian artistic culture, but it is designed to hold a mirror to the effect on world art. The exhibition shows the Russian avant-garde artists that in the early 1900s tried to introduce art as a lifechanging power, the ground-breaking work of the artists in this period where the reformist atmosphere had been brought about by the October Revolution in 1917, and the social design they tried to put into practice supported by the new regime and also the wide boundaries of the future they dreamed of. The exciting technological developments and industrialisation that occurred in the early 20th century turned the avant-garde artists towards science and overcoming the boundaries of the earth, dreams of space reflected the beliefs the artists had in the future and this is very vividly reflected in the works displayed in this exhibition.

One of the world’s most important Russian Avant-Garde collections, the George Costakis Collection at Thessaloniki State Museum of Contemporary Art forms the basis of the ‘The Russian Avant-garde. Dreaming the Future through Art and Design’ exhibition. The George Costakis Collection of Russian Avant-Garde collected with great passion by George Costakis and secured for future generations, contain works by important artists which are part of the exhibition including  Kazimir Malevich, the creator of art history’s iconic Black Square, Vladimir Tatlin, the pioneer of a new period of artistic theory where he obscured the boundaries between art and production, Alexander Rodchenko the courageous pioneer of photography, painting, sculpture and graphic art. Again, from the George Costakis Collection are works by representatives of the many female artist of the period such as Olga Rozanova whose work was based on interaction between text and depiction, Lyubov Popova who with her set designs contributed to the transformation of plays into the language of the theatre, and Natalia Goncharova who turned towards Russian folk art and undertook a determining role in Russian Avant-garde. The exhibition, ‘The Russian Avant-garde. Dreaming the Future through Art and Design’ is the first time the works of all the big names representing this turning point in 20th century art history come together in Turkey.

In the research into how the new art and society should be constructed, the applied artwork that reflect Russian Avant-Garde, which also consider Russian folk art, the collection of the examples of design covering all fields borrowed from Moscow All-Russian Museum of Decorative Arts show the scope of the ideals of the Russian Avant-Garde to reorganize life and the history of people’s relationship with art.

The large photo anthology of documentary character from Moscow Multimedia Art Museum, which also houses the photo archive of the great name of Russian Avant-Garde Alexander Rodchenko, shows the compatibility of the Russian Avant-Garde with new technology and opens a window to the private world of the artists.