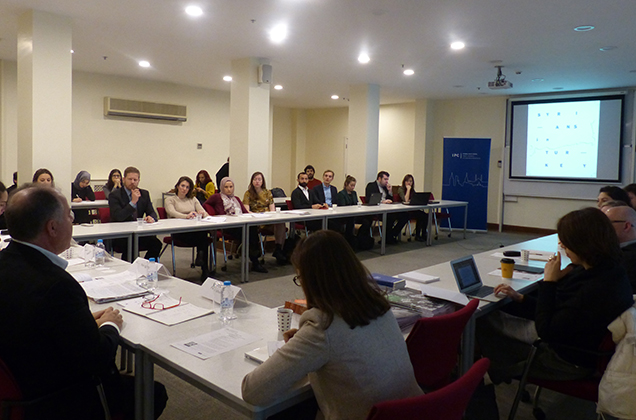 Istanbul Policy Center-Sabancı University-Stiftung Mercator Initiative held a panel discussion on "Syrians in Turkey" and revealed its report on "The Role of Civil Society in Encouraging Pluralism" in an event at Minerva Han. Panelists discussed the state of Syrians in Turkey and the policies implemented since the Syrian refuge began.

Istanbul Policy Center-Sabancı University-Stiftung Mercator Initiative held a panel discussion on "Syrians in Turkey" and revealed its report on "The Role of Civil Society in Encouraging Pluralism" in an event at Minerva Han.  In the first part of the event, panelists discussed the state of Syrians in Turkey and the policies implemented since the Syrian refuge began. The moderator of the discussion was Mercator-IPC Fellowship Program Coordinator Pelin Oğuz, and panelists were IPC Fellows Souad Osseiran and Kristen Biehl, and Human Development Foundation (INGEV) President Vural Çakır. Panelists discussed the health, labor, civil society and social integration aspects of Syrians in Turkey, and the different encounters between Syrians and host communities in Turkey.

Coordination is vital for the efficiency of adaptation trainings

INGEV President Vural Çakır said that adaptation groups in universities and high schools were crucial for preventing discrimination, and continued “The disconnection and lack of coordination among naturalization services cause inefficiency and wastage. Adopting a long-term perspective in training courses and offering programs in fields that have greater employment opportunities will make efforts more meaningful.”

"Bringing good examples to the foreground will relieve social tension. Turkey is doing a great job on the one hand, yet the Syrian refugee issue may turn into a problem that can be manipulated easily and cause disturbance in the society. A careful balance must be achieved. We must communicate that Syrian refugees are here not of their own volition but out of a simple need to survive, and that when they integrate with the population of Turkey under their different identities, they will add value and diversity to the society."

The report quoted General Directorate of Migration figures, saying that 3,541,572 Syrians were living in Turkey, 210,177 of whom were in refugee camps. Referring to the figures, Fuat Keyman said, “Research suggests that 55 to 60% of refugees intend to stay. This is why the issue is not hospitality, but naturalization. A new populace is being introduced to Turkey, and our population of 81 million is in fact closer to 83.5. We are at a stage where mismanagement of the issue could lead to serious problems. Naturalization and integration efforts must cover education, employment, economy, gender equality, youth, and social harmonization."

2016/17 Mercator-IPC Fellow Kristen Biehl noted that there were few NGOs on migration in Turkey prior to the arrival of Syrians, continuing, "This led to the multiplication and diversification of NGOs. Syrian refugees contributed to the positive development and diversification of the civil society in Turkey. As actors became more diverse, institutions improved themselves."

Refugee and migration issues are too serious to be considered temporary

The report on "The Role of Civil Society in Encouraging Pluralism" was introduced in the second part of the event. The session was led by IPC Senior Specialist and Academic Coordinator Senem Aydın Düzgit, and speakers were Trent University Political Science and International Development Studies Faculty Member Feyzi Baban, 2015/16 Mercator-IPC Fellow Hande Paker, and International Migration Research Center Associate Director Kim Rygiel. Discussions focused on the role of grassroots and civil society initiatives in opening communities up to newcomers, and current issues on coexisting with differences. Panelists referred to field studies and cited three best practices regarding the promises of bottom-to-top approaches: The village of Riace in Italy; a Turkish cultural center in Gaziantep; and a Berlin-based cuisine project.

Speakers noted that the report used comparative examples to illustrate how civil society and grassroots initiatives help to remove obstacles and flex boundaries between locals and newcomers, citizens and immigrants, and in the most general terms, the insiders and the outsiders. The report emphasizes that refugee and migration issues are too serious to be considered temporary, and in the light of the studies suggesting that migrant and refugee movements would continue in a global world, will be one of the key challengers of existing policies. As a solution, governments and local administrations are encouraged to view the issue as a whole instead of regarding it temporary, and ensure that their support to grassroots and civil society initiatives tackling the issue are permanent.

Since 2001, IPC has provided decision makers, opinion leaders, and other major stakeholders with objective analyses and innovative policy recommendations.