Sakıp Sabancı Museum’s The Arts of The Book and Calligraphy Collection, and Painting Collection includes rare art works of the Ottoman and the Republican periods. Click to explore the link between these two successive collections. 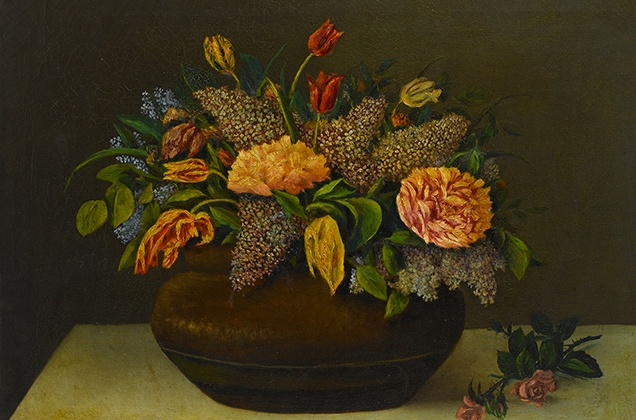 The history of Ottoman Art constitutes a line extending from the arts of the book to the art of painting, which is also reflected in the selection of Sakıp Sabancı Museum’s collections.

From the 18th century onwards, the kıt’a koltuk panels were decorated with bouquets or vases of ample flowers. The calligrapher Şekerzade Mehmed (d. 1753), who worked in the first half of the century, taught calligraphy at the Palace during the reigns of Ahmed III (r. 1703-1730) and Mahmud I (r. 1730-1754). Because his father was a confectioner, he was known by the cognomen Şekerzade. Each sleeve of the kıt’a he wrote bears a naturalistic drawing of mixed bouquets executed by an accomplished painter of flowers, representing the taste of the period. These bouquets have thick and short stalks and each include a layered rose, a pink tulip, a two-colored viola, a branch of an unbloomed gillyflower and little blue chrysanthemums.

During the 19th century, these drawings of flowers on koltuk panels moved to canvases as the Ottoman painters had started painting still lifes of flowers in vases.

The Still Life with Flowers by Şeker Ahmed Paşa (d. 1907) in the Sakıp Sabancı Museum Collection will remind the viewer of the flower painting in Şekerzade’s kıta. Attributed the cognomen Şeker due to his mild and calm character, Ahmed Paşa had been sent by Sultan Abdülaziz (r. 1861-1876) to study art in Paris where he attended classes of Gustave Boulanger and Jean-Léon Gérôme. During his stay in the city, he also participated in Paris Salon exhibitions. Following his return to his homeland, he taught in military schools and held the first painting exhibitions in Istanbul. He assisted Osman Hamdi Bey in founding The Royal School of Fine Arts (Sanayi-i Nefise Mekteb-i Âli). As the assistant of Abdülaziz, he played a major part in building the palace art collection, which went on to become the core of the painting selection in the collection of the Directorate of National Palaces.

Şeker Ahmed Paşa’s Still Life with Flowers which bears the date 1903 and resembles one of the bouquet of flowers on Şekerzade Mehmed’s kıt’a, also displays influences of Dutch flower paintings, a tradition he had probably encountered at the Louvre Museum during his stay in Paris. Placed in a broad brown vase on a marble table, the bouquet of hyacinths, tulips and peonies, and the pale flowers and leaves in between, brings to mind the naturalistic style of the flower drawings decorating the kıt’a koltuk panels.