Sakıp Sabancı Museum’s The Arts of The Book and Calligraphy Collection, and Painting Collection includes rare art works of the Ottoman and the Republican periods. 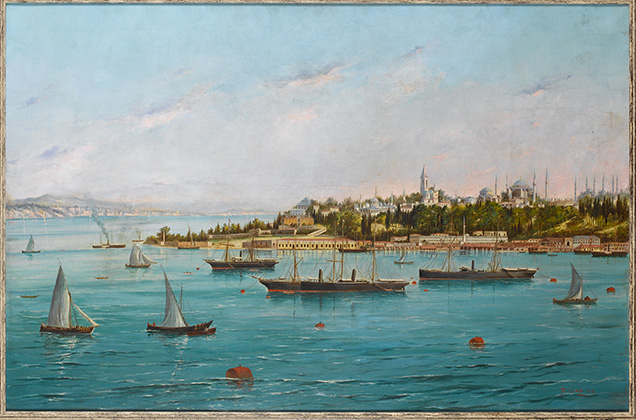 Both the Arts of the Book and Calligraphy Collection and Painting Collection of Sakıp Sabancı Museum include landscapes of Istanbul and Bosphorus drawn on a variety of materials. 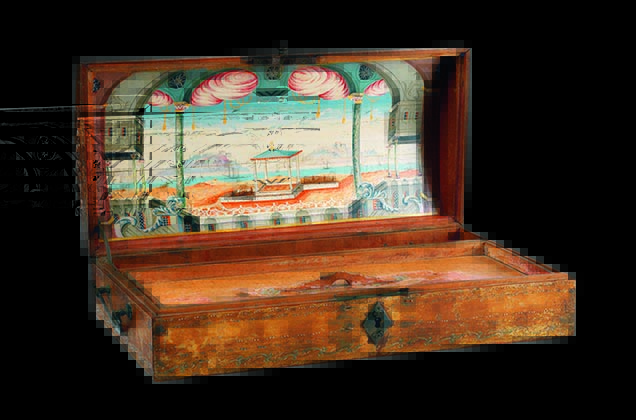 A wooden box that calligraphers used for carrying their tools stands out because of the pictures engraved both on and inside of its lid. The picture within the box, which covers the whole surface, is a landscape presenting a view of the sea from inside a structure with sequential arches. The architectural details reveal an attempt at perspective drawing and the canopy on the background seen afar from the structure has a distinguishable quality. The painting depicts the sailboats in the sea, island-like pieces of land afar, and birds up in the air with a sharp eye on the detail.

These calligraphy box paintings are smaller versions of the landscape paintings spread between the baroque ornaments of the interior spaces; a practice related to the westernization period during the second half of the 18th century. It is possible to date the specific painting in question to the 19th century concerning its similarities with the wall paintings of the period.

The practice of landscape painting on the wall had been transferred to the canvas during the 19th century. Davit Çıracıyan’s painting Ships in Sarayburnu is among the most beautiful paintings depicting Istanbul.

Çıracıyan learned the art of painting in several studios of Istanbul, which earned him a distinct position within his contemporaries as he could pursue a local style contrary to other painters of the period who studied in Paris studios. Besides, his travels to Egypt, France, Britain, Switzerland, and Austria provided the artist with the opportunity to be acquainted with the art movements and artists of the period.

The painting Ships in Sarayburnu reminds of Western painters’ Istanbul landscapes focusing on the Sarayburnu district. The artist should have seen this type of depiction of Istanbul throughout his studies in the studios of foreign artists working in Istanbul. Topkapı Palace, Sultanahmet Mosque and Haghia Sophia are the most prominent elements of Çırayan’s depiction of Sarayburnu. The painting documents the coast of Sarayburnu where Topkapı Palace’s components extend towards the sea as well as boathouses, sailboats, galleys, and steamboats, a novelty of the period. Concerning its depiction of walls surrounding the garden of the palace and other buildings in the area, the picture also presents the state of the Sarayburnu district at the end of the 19th century.

Çıracıyan’s landscape painting is a delicate and naïve depiction of Istanbul due to its colors and brushstrokes and bears a photographic quality. As the painting inside the calligraphy box, this piece represents its view at a standstill.

Click to explore the link between these two successive collections.