This fall, the Sabancı University Sakıp Sabancı Museum (SSM) will host ‘The Living Pyramid,’ a site-specific work by Agnes Denes, a prominent ecofeminist artist. The work will be displayed in the SSM garden between September 13, 2022 - January 29, 2023, with the main sponsorship of Sabancı Holding, and all communications sponsorship by Çimsa. 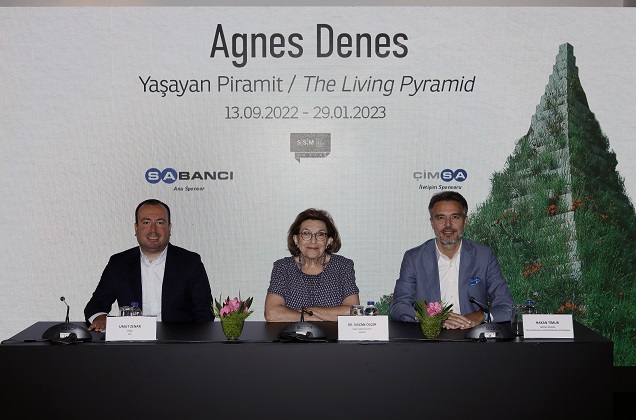 Denes' artistic practice is distinctive in its aesthetics and engagement with socio-political ideas. Her art aims to inspire, and urge people to action, as well as calling attention to social concerns, and involving people from all walks of life by way of a benign, non-invasive artistic practice, that is both gentle yet forceful, without conceding artistic intent. Bringing global awareness to humanity’s most pressing issues, such as environmental pollution and climate change, is reflected in all of Denes’ works. She has spent much of the last forty years putting forth her ecological and philosophical ideas to communities throughout the world.

The Sakıp Sabancı Museum Director, Dr. Nazan Ölçer said: “Agnes Denes, a pioneer of ecological art, is the focus of this year’s exhibition of contemporary art at the Sabancı University Sakıp Sabancı Museum, a biannual series that began with the Blind Date exhibition in 2007. The pandemic, which has taken a hold on the entire world for the last two years, has only served to exacerbate our environmental concerns, leading us to question our relationship with the earth. Indeed, with the added responsibilities of our new, green museum certification, we have prioritized this issue even more in our programming. ‘The Living

Pyramid’ was realized in close collaboration with Denes, who has made a name for herself with her large-scale ecological interventions from the 1960s onwards and will be on display in the Sakıp Sabancı Museum garden between September 13, 2022 – January 29, 2023. Denes’ ‘Manifesto,’ which she wrote in 1969, will also be exhibited alongside the pyramid, a structure which ‘revives’ our relationship with nature by acting as a metaphor for our existence in this world.

Agnes Denes (b. 1931, Budapest, Hungary) is a Hungarian-born American artist based in New York, known for her conceptual work that focuses on ecological concerns. Since her exhibition career began in the 1960s, she has participated in hundreds of exhibitions at galleries and museums throughout the world. Aside from her large-scale environmental projects, her drawings, paintings and three-dimensional works are in the collections of many major institutions. 'The Living Pyramid' is her first work to be exhibited in Turkey.

The pyramid was planted, in part, by volunteer participants on September 10-11, and it will grow and change shape as thousands of seeds turn into grasses and flowers. Denes’ Manifesto, carved onto a marble slab and produced especially for this exhibition in line with the artist’s wishes, takes its place as a permanent addition to the collection and garden. It is a great source of pride that the esteemed author Buket Uzuner, who for many years has focused on ecological concerns in her work, has accepted our invitation to read the artist’s ‘Manifesto’. I am very grateful to her.

‘The Living Pyramid’ will be activated through accompanying educational programs, promoting environmental awareness, conservation, and sustainability. After the exhibition, the Sakıp Sabancı Museum will continue to embrace Denes’ approach, inviting visitors to adopt the plants. Though the pyramid will disintegrate when members of the community share it among themselves, it will continue to grow and prosper as small parts of the formerly monumental form Denes’ ‘Manifesto’, on the other hand, will live on in the garden as a reminder of ‘The Living Pyramid’, and the micro-community that came together to create it. I would like to thank Sabancı Holding and our communications sponsor Çimsa for their support throughout this valuable and meaningful project.” 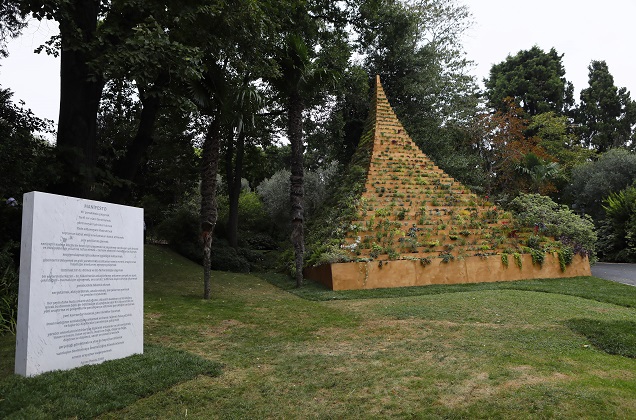 Sabancı Holding Human Resources and Sustainability Group President Hakan Timur said: “At Sabancı Holding, we are devoted to the issue of sustainability at the highest level. The fact that we chose ‘For sustainable living, we unite Turkey with the world through pioneering initiatives' as our Community Promise is an excellent indicator of this commitment. With our sustainable growth model that protects nature and an awareness of our power to influence, we work hard to do our part in every issue we undertake. Among them, our initiatives regarding art have a significant place. Art brings us together and creates a collective consciousness. Thus, by supporting ‘The Living Pyramid’ exhibition, we aim to sustain a social awareness that will benefit the environment.”

Çimsa CEO Umut Zenar said: “Carrying the utmost awareness of our responsibility towards our environment and society, we consider the issue of sustainability to be part of our primary strategy and our way of doing business. At Çimsa, we are constantly trying to develop solutions to combat climate change, which is critical for a sustainable future. We also support the work done for this cause, which is why ‘The Living Pyramid’ project has been a production that we have stood behind. We aim to reduce the carbon intensity with the studies we carry out within our organisation and our investments in renewable energy sources.”

On Agnes Denes and ‘The Living Pyramid’...

Driven by an inexhaustible curiosity, Agnes Denes continually expands her ideas, forms, and processes to bring to the surface an almost prophetic vision of the future of humanity. This vision she has created boldly evaluates our reality; but, at the same time, continues to look to the future with hope.

‘The Living Pyramid’ is a site-specific work, first constructed in 2015 at the Socrates Sculpture Park in New York and later at the Nordstadtpark in Kassel as part of documenta 14 in 2017. It can also be thought of as a living sculpture, with a natural life cycle. Made of wooden stepped terraces filled with four tons of earth, the pyramid arcs nine meters into the sky. Planted into its terraces are two thousand plants and flowers belonging to approximately six hundred species, selected in collaboration with the artist from the urban flora of Istanbul, their positions on the pyramid determined by the amount of sun and shade falling on each façade. The pyramid will evolve throughout its public exhibition: the plants will sprout and bloom, some will go to seed, some will die.

Denes’ statement, “While the pyramids are based on mathematics and thus achieve a kind of perfection, they contain all the imperfections they are dealing with or are representing and visualizing,” provides some insight into why she chooses to explore the relationship between humans and nature through the living pyramid. The artist, who has been using the pyramid form as a metaphor in different media from drawing to sculpture for nearly half a century, also uses the form to question the social hierarchies inherent in our perception of the world. 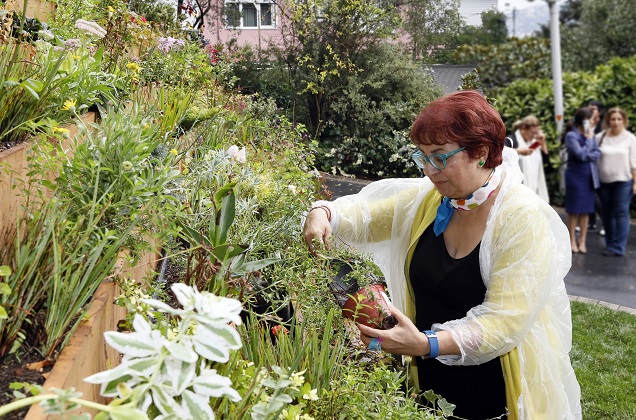 Between 1 October, 2022 – 29 January, 2023; SSM Learning Programs will hold workshops for children from different age groups. The focus will be on environment and ecology.

The programme of conferences and events for adults can be found on the SSM website.

*All children’s workshops and adult events are in Turkish.