Akış / Flux, an exhibition featuring Marina Abramović + MAI opens at Sabancı University Sakıp Sabancı Museum (SSM), along with its conjunction at Akbank Sanat on January 31, 2020 with the support of Akbank.

The exhibition will constitute Turkey’s first large-scale retrospective of Marina Abramović, who is one of the pioneers of performance art in the world, and will be open to visit until April 26, 2020 between 12:00 - 20:00, six days a week. Akış / Flux, realized with the joint efforts of SSM and Marina Abramović Institute (MAI), will introduce video and photographic documentation of performances by the artist, along with live performances developed with MAI and artists who were brought together by an open call and invitation, as well as a section dedicated to the Abramović Method. Concurrent with the exhibition Akış / Flux at SSM, Akbank Sanat will host a documentary series presenting the history of works by Abramović, as well a video gallery featuring numerous works in performance, aiming to explore the legacy of performance art still informing its present. 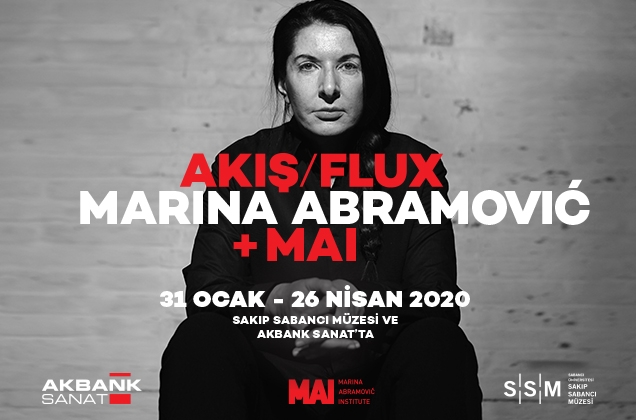 The exhibition at SSM consists of three sections. The first section will feature video and photographic documentation of Marina Abramović’s iconic performances, loaned from private collections and institutions, to represent the artist’s 50-year career. Akış / Flux aims to introduce and support performance art, which is the general term developed in the 1970s to define the non-object, immaterial and time-dependent form of art that is widely performed today as an interdisciplinary social process, encouraging art audiences in Turkey to experience performance art firsthand.

The second section of the exhibition will present performance projects both submitted to an open call launched in August 2019 for practicing artists working in all forms of performance, as well as artists invited to participate in the exhibition. The long durational live performances will be taking place alternately within a three-month schedule for eight hours between 12:00 - 20:00 every day the museum is open to visit.

Akış / Flux will be concluded by the section dedicated to “The Abramović Method”, where visitors will be invited to participate in a unique experience through exercises Abramović developed for the public. Created over decades of research on performance and immaterial art, Marina Abramović deems “The Method” to be her masterpiece, and the audience will hold a central place in the section where they will be presented with new experiences. “The Abramović Method” is a large scale, public participatory event joining people in a communal experience to connect with oneself and with each other, and an exploration of being present in both time and space through exercises that focus on breath, motion, stillness, and concentration.