Sabancı University Mechatronics Engineering PhD 2020 alumni Hakan Osman Çaldağ’s paper has been regarded as noteworthy by the editors of the prestigious fluid mechanics journal Physics of Fluids and promoted as Editor's Pick in the September 2020 issue. 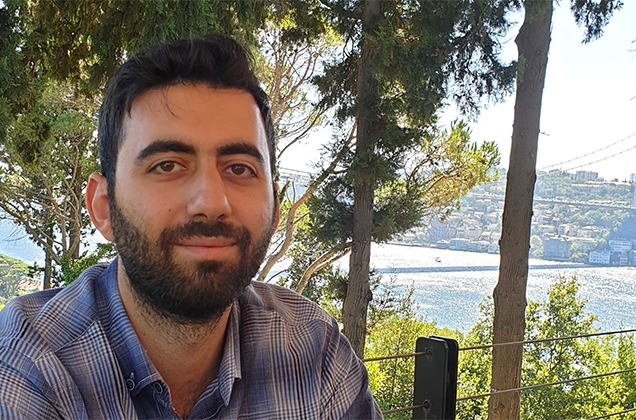 Hakan Osman Çaldağ's paper is based on a part of his PhD thesis work supervised by FENS Member Serhat Yeşilyurt and titled “Acoustic radiation forces on magnetically actuated helical swimmers”. In this article, Caldag investigated the effects of acoustic fields on the trajectories and velocities of artificial helical swimmers by introducing a computationally efficient method, called chain-of-spheres, to calculate the acoustic radiation force acting on the swimmers.

Inspired by the flagellated bacteria in the nature such as E. coli, artificial helical microswimmers have potential medical application areas such as drug delivery to tissues and organs, opening of clogged arteries and microsurgery. Since the dimensions of the swimmers go as low as nanometers, one cannot place on-board actuation mechanisms such as motors. That’s why these swimmers are actuated by external means. When the helical swimmers are coated with a magnetic material, they can rotate under a rotating magnetic field and this results in net propulsion. However, magnetically actuated swimmers exhibit several instabilities such as wobbling, tracing helical trajectories and asynchronization with the magnetic field that severely impact the swimming performance. In the article, acoustic waves are proposed to overcome these issues. Acoustic waves are used often in the medicine and they have no harm to the human body. Thus, they can be used alongside the rotating magnetic fields which are harmless to the humans as well. The effect of the acoustic waves on the swimmers manifest itself through what is called acoustic radiation force. However, the evaluation of this force through the traditional means such as the finite-element modelling requires high amounts of computer memory and the solution takes several minutes. In this study, a new analytic approach, called chain-of-spheres, is developed and the radiation force acting on the swimmer can be calculated in seconds with low memory usage at high accuracy. In this approach, the helical structure is approximated as a chain of spheres and the total force acting on the helical structure is found equal to the sum of the forces acting on the spheres which can be calculated analytically. This modelling approach is coupled with the simulation model of the helical swimmer under magnetic actuation and swimming under magnetic and acoustic fields is investigated. It is observed that the travelling acoustic waves enhance the swimming velocity and decrease wobbling whereas the standing wave fields can be utilized for keeping the swimmer stationary at a unique position depending on its geometry.