Organized to revive the competitive spirit of sailors from universities during the pandemic with further lockdown measures, and to bring university students together, the championship was attended by 60 students from 15 universities in 3 countries. 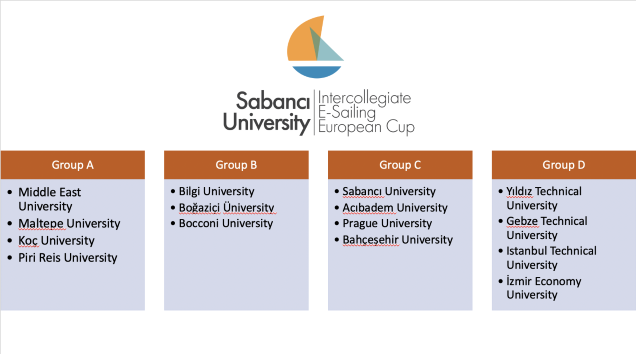 The sponsors of the event were Sabancı University, Redbull, All of Chrome, E-sailing Club, Reflect Studio, Alize Yachting and Sailranks. Quarter final matches were broadcast on the YouTube channel of eSailingClub, Turkey’s biggest sailing club, while the semi-final and final matches were shown on YouTube, Twitch and Facebook through eSailingTV, one of the eSports live broadcasters in the world.

Both the organizers and the winners of the championship, SU Sailing Team members said the following after the championship: “In this lockdown period when we had to stay away from sailing, SUCup enabled sailors from universities to come together and recapture their competitive spirit. We are really proud to be both the organizers and the winners of this successful event, which was held for the first time. We congratulate everyone who put their efforts in it and all the teams that competed in the championship.”

Members of BİLGİ team, who came second in the competition said, “due to the lockdown measures restricting physical activities to a great extent, the e-sailing concept became a perfect alternative for the sailing community. We sincerely thank SU Sail team and everyone else who contributed to this beautiful championship. We really enjoyed being involved in it, particularly due to the awards and the racing concept. We had a quite comfortable and entertaining race. We guess the broadcasting of the events presented a real festivity for lovers of sailing.”

Pointing out that they were able to come together and live the excitement of a sailing competition thanks to this beautiful event organized in a period where they had to stay away from sailing, members of Koç University Sailing Club team added, “we congratulate the organizers of this highly professional championship for their dedication. Hope to see you in the upcoming events!” Rabia Balcıoğlu from Yıldız Technical University team said she had a very pleasant time during the two weeks of competition, and added “the fact that it was a team game made it even more exciting. I am looking forward to participating in the upcoming events.”

Awards to the teams were given by All of Chrome, WWF Market and Eye Connection, the main award sponsors. Moreover, awards from Yves Rocher, Alize Yachting and FAM Coffee were given to the competitors.

You can watch video records of E-Sailing European Cup championship by using the links below.