Dicle Koğacıoğlu Article Awards Were Presented for The 11th Time 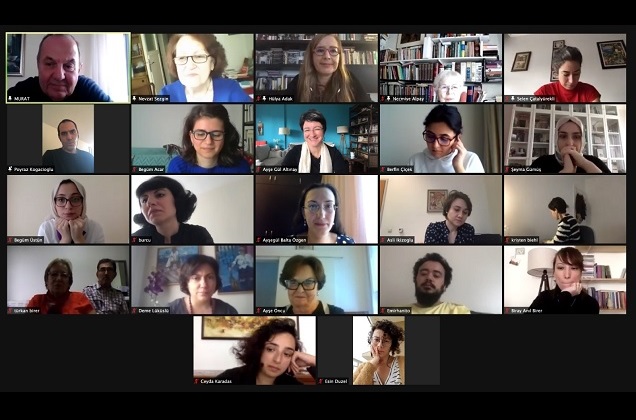 The “Dicle Koğacıoğlu Article Awards” presented by Sabancı University Gender and Women's Studies Center of Excellence (SU Gender) in memory of Dicle Koğacıoğlu, an academic and activist who passed away in 2009, was announced at an online conference on December 26. This year, articles by Biray Anıl Birer, Şeyma Gümüş, and Burcu Hatipoğlu won the award.

Working to raise awareness regarding gender in Turkey for 10 years with programs such as the Purple Certificate, Curious Steps, Transformative Activism, and Gender Equality, SU Gender has been giving the Dicle Koğacıoğlu Article Awards since 2010 with the support of Sabancı University Faculty of Arts and Social Sciences. The awards aim to support gender-focused research on Turkish society and culture and to encourage young researchers.

Hülya Adak, the Director of SU Gender, spoke at the opening of the conference: “Dicle Koğacıoğlu Article Award and Conference brought us together for the 11th this year. Dicle joined the Faculty of Arts and Social Sciences of Sabancı University as a faculty member in 2005 and made significant contributions to the development of cultural studies undergraduate and graduate programs and gender studies. She also conducted studies that drew attention to the inequalities and injustices experienced in all areas of life, including universities. She contributed to the development of the sociology of law in Turkey and the awareness regarding the importance of gender in this field through numerous publications and studies. As SU Gender, we are happy to support young researchers working on gender while commemorating a very valuable friend with the Dicle Koğacıoğlu Article Award. I congratulate the researchers who received awards this year for their studies on gender and intersectionality in anthropology, literature, and history. I would also like to thank the members of the Dicle Koğacıoğlu Award Selection Committee; Evren Savcı, Etienne Charriere, Seda Kalem, Demek Lüküslü, and Aslı İkizoğlu for their support in the selection of the winning articles.

Dicle Koğacıoğlu Award Ceremony inspired us to develop two separate award ceremonies. Since 2017, we have also been organizing the Şirin Tekeli Research Award and Conference to support doctoral and postdoctoral research projects. As of next year, we are starting the third award program with the support of the Sabancı Foundation. Starting from 2021, we will award high school teachers who completed their training and received a Purple Certificate with Good Examples Award for their precedent work on gender equality in their own schools and provinces.”

Noting that Dicle Koğacıoğlu introduced innovations especially to the law-related parts of sociology classes and opened the Law and Society classes, Meltem Müftüler Baç, Dean of the Faculty of Arts and Social Sciences of Sabancı University, who attended the opening of the meeting, said, “The articles written by Dicle on violence against women still remain our biggest reference point, and we still feel her absence.”

Nevzat Süer Sezgin, mother of Dicle Koğacıoğlu and the special guest of the opening ceremony, said: “It feels very good to see that Sabancı University has achieved its goal with the award given in memory of Dicle. It is impossible not to adopt the principles of SU Gender. With programs such as Curious Steps, Purple Certification, awards, international conferences, forums, training programs, and transformative activism programs, which we wish to see in all universities, but unfortunately cannot, SU Gender and Sabancı University continue to make a difference.”

Following the opening ceremony with the speeches of Dicle Koğacıoğlu's former students, a panel facilitated by Aslı İkizoğlu was held. The winners of this year’s awards were announced in the panel: Biray Anıl Bir, “Fragments from Women's Modernization Experiences: Değirmisaz, A Mining City”; Burcu Hatipoğlu, “Rural Distress and Loving the Rural: The Case of Somalian Refugee Women in Kütahya”;  Begum Üstün “How Murders of Women Were Reflected in Istanbul Newspapers in The Early Republic Period (1923-1945)”; and  Şeyma Gümüş, “Rapist Others, Marginalized Women: Sexual Violence and The Female Body in Ömer Seyfettin's Stories”.

Burcu Hatipoğlu, “Rural Distress and Loving the Rural: The Case of Somalian Refugee Women in Kütahya”

The film prepared by SU Gender for Dicle Koğacıoğlu and the book prepared last year can be found at the links below.

Dicle Koğacıoğlu was born in 1972 in Izmir. After graduating from the Boğaziçi University Sociology Department, she continued her doctoral studies at the State University of New York at Stony Brook in the fields of sociology and women’s studies. From 1997-1998, she worked as a research assistant for the international project titled “Constitutional Law and The Modernization of Political Institutions in the Islamic Middle East.” In the same year she took part in the Human Right Watch project “Freedom of Expression in Turkey” as a consultant and translator. In 1999, she returned to Boğaziçi University and worked as an instructor in the Sociology department. She was then a coordinator at the İzmit Doğukışla Rehabilitation Center for a project by Women for Women’s Human Rights that was organized for children who were traumatized after the 1999 Marmara earthquake. In the same period, she acted as an editorial assistant for the book Women and Sexuality in the Muslim World. She continued her graduate research from 2002-2004 at Columbia University and Brown University’s Pembroke Women’s Studies Center. After beginning to work as an instructor for the Sabanci University Arts and Social Sciences faculty, Dicle Koğacıoğlu made important contributions to the development of the undergraduate and graduate Cultural Studies programs and gender-based projects. At the same time, she led projects that were attentive to the deaths in the Tuzla shipyards, to the problems of the subcontractor system found in every domain of life, including the university, and to inequalities and injustices experienced in every area.

Koğacıoğlu was an Amargi and Birbirimize Sahip Çıkıyoruz (We Are Looking After Each Other) activist, and was a steadfast volunteer for projects focused on caring for street animals.Dicle Koğacıoğlu’s doctoral thesis was a major contribution to the advancement of the sociology of law in Turkey and to the recognition of gender within that field. Titled “Law in Context: Citizenship and Reproductıon of Inequalıty in an Istanbul Courthouse,” it was the recipient of the Middle East Competition Award by the Lebanese Center for Policy Studies and the Middle East Awards (MEAwards) by the Population Council. Her articles that underscore the decisive role of law and the state in honor killings continue to be widely used in both international academic studies and within Turkey. Dicle Koğacıoğlu, when she left us in the year 2009, was creating a space for research about access processes to justice, and at the same time she was investigating how the September 12, 1980 coup was perceived and understood by lawyers.