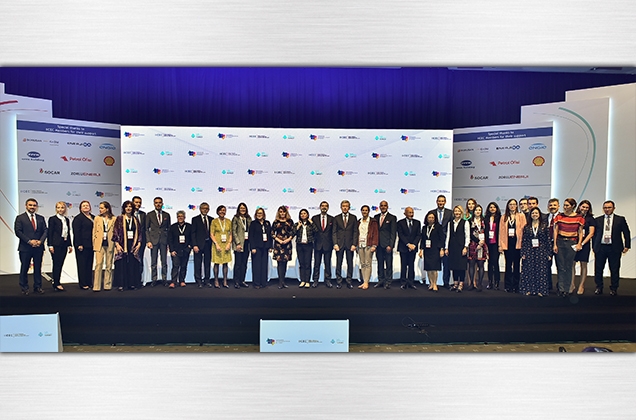 In her opening speech, Sabancı University Founding Chairman of the Board of Trustees Güler Sabancı stated that “Clean energy is at the center of the transition to a less carbon-intensive and more sustainable energy system. Technology and innovation are critical factors at this junction. We have to focus on women’s role in this respect and that’s why we have gathered together today. I have always believed that; to live up our potential and contribute to our society, we, as women and men, all deserve the same fair opportunities.” Ms. Sabancı said that women still constitute less than half of the workforce in clean energy, science and technology and they are not adequately represented at decision-making levels. And added: “In the energy sector, women make up 20% of the workforce. This number is relatively better off in clean energy with 32%, perhaps, reflecting women’s preferences for sustainability! In oil and gas this number drops to 22%. Furthermore, half of the women employed in energy sector work in administrative jobs. The ratio of women in STEM-related jobs is only 8.9%. In a nut shell, energy sector remains to be the most gender imbalanced sector with respect to the work force.” 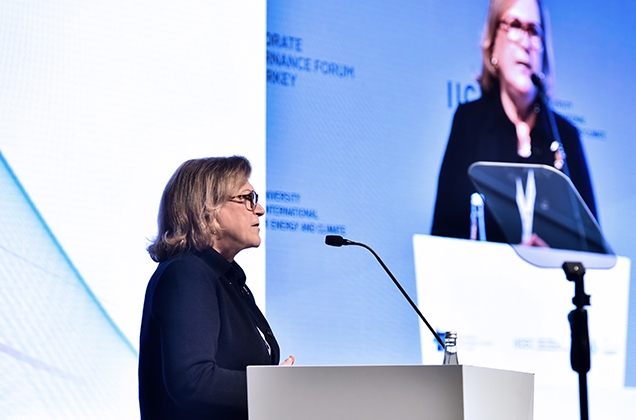 Güler Sabancı pointed out that women's representation at the position of leadership is worse. Ms. Sabancı added “For example, in 2017, in the Ministerial Meeting held under IEA, of the 39 countries there were only 4 women in the top jobs. In 2018, among the top global 100 oil and gas company, only one had a female CEO whereas women constituted only 15% of senior management positions. In Turkish energy sector, the figures are similar to the global facts. Women constitute 24% of the energy workforce whilst they hold 17% of the managerial roles. I firmly believe that a clean energy transition that the world urgently needs will only materialize with a greater participation of women who can introduce fresh perspectives and innovative business models. Studies show that as women tend to include others more in decision making, they create better incentives and work environment and also manages risks better.”

Ms. Sabancı also said “Studies also suggest that gender diversity specifically in energy sector increases profits and generates efficiencies. With these in mind, several initiatives on clean energy and renewables contribute and support the empowerment of women. Women receive 50% of university degrees in OECD countries but only 30% are related to science and technology. Only by looking at the graduates of the STEM fields, we can say that, gender inequality starts at the school level. According to the United Nations figure, while women make up 52% of the world population, women researchers in science only account for 30%. It is clear that there is a serious room for improvement at every level and at every industry.

From our perspective, we, as the Sabancı Group, have always been the pioneer and a model in gender equality. One out of four managerial positions is held by women in our energy companies. One out of three white collar worker is also women. Not enough, but on the right direction. Sabancı Holding is the first Turkish signatory of UN’s  Women Empowerment Principles. Beyond that, Sabancı Foundation supports society-wide and business focused programs that promote gender equality. These figures and initiatives show our sincere commitment to the cause.”

At the opening of the conference titled “Women Leaders in Clean Energy, Science and Technology” Dr. Fatih Birol, Executive Director of the International Energy Agency (IEA) addressed the participants with a video message. Fatih Birol stated that the issue of promoting gender equality in the energy sector is one of the top three issues in the modernization strategy initiated when he was elected as the IEA President 4 years ago.

Dr. Birol stated “today when we look at the entire workforce we see that the share of women is close to 50% (exactly 49%) but in the traditional energy the share of female experts, staff is only 25%. When you look at the renewable energies, which you may think would be much higher it is only one third. If you look at the management levels the numbers are even poorer in terms of women’s participation. At the International Energy Agency since four years as a result of the modernization efforts we now see the number of female staff came to, as of now, 49% from much lower levels. In terms of senior management the share of women increased substantially at the International Energy Agency. Why we do this is not only fairness, which is very important, but we all know (I experienced this in the last four years) it provides much better results, brings us to better decision-making system.  At the international level we have built a dedicated program to gender equality.”

Melanie Kenderdine, Energy Futures Initiative Principal and Former Chief Advisor of the US Secretary of Energy, delivered a presentation titled “Why Should We Increase Women's Place in the Energy Sector?” Ms. Kenderdine said “the share of women among the leaders is only 17% in the energy sector. This ratio is lower in automotive, transportation, industrial production and infrastructure. However, according to statistics, women have more leadership positions in companies that provide better financial performance.” Melanie Kenderdine drew attention to the salary difference between women and men working at the same position. Ms. Kenderdine added" among OECD countries salary differences between gender is 36.6% in South Korea, 20.1% in Turkey, 17.9% in the US, 5.6% in New Zealand.”