SU Gender, in collaboration with Mimar Sinan Fine Arts University Women’s Studies Research Center, hosted the feminist writer, theorist and professor Cynthia Enloe from Clark University, an internationally renowned academician for her work on gender and militarism as well as for her significant contributions to the field of feminist international relations. In her talk she gave at Karakoy Minerva Palas, Enloe said, “Women’s rights are human rights and human rights are women’s rights.” 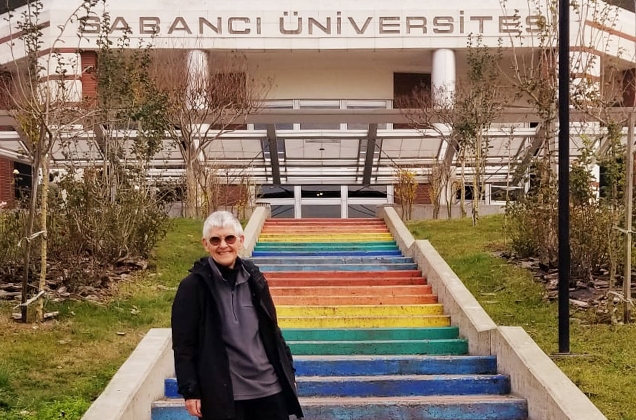 Sabancı University Gender and Women Studies Center of Excellence (SU Gender) continues to invite new people working on the issues of gender. This time, in collaboration with Mimar Sinan Fine Arts University Women’s Studies Research Center, SU Gender hosted the feminist writer, theorist and professor Cynthia Enloe from Clark University, an internationally renowned academician for her work on gender and militarism as well as for her significant contributions to the field of feminist international relations. In her talk she gave at Karaköy Minerva Palas, Enloe referred to Charlotte Bunch’s famous saying, “Women’s rights are human rights, and human rights are women’s rights.”

Enloe, being a research professor in the Department of International Development, Community, and Environment (IDCE), addressed to the 30-year period paving up the way to the  #MeToo campaign that recently became viral in the world and shared the journey of how women have attained the current legislative regulations pursuant to sexual harassment in decades.

When American actress Alyssa Milano on 15 October 2017 first tweeted in her social media account “If you have been sexually harassed or assaulted, write ‘me too’ as a reply to this tweet”, she launched “MeToo” movement that gave voice to women’s exposure to flirt violence, harassment or sexual assault and turned into a global reaction being a trend topic on twitter for 100 days.

Tens of thousands of women and men revealed to the world their sexual harassment and rape stories which they have never shared even with their closest circle before with the hashtag “MeToo”.

This tweet has been retweeted or liked thousands of times and received over 40.000 replies. #MeToo campaign was launched to prove how prevalent sexual harassment was and what kind of a risk it posed for women in all workplaces including Hollywood.  Some of the celebrities who supported to the campaign included Lady Gaga, Debra Messing, Anna Paquin and Evan Rachel Wood. In the meantime, the results of the movement have become a topic for academic discussion.

Milestones of Women’s Movement are Important!

Professor Enloe summarized the 30-year history of international feminist struggle for women’s rights paving up the way to  #MeToo movement and shared the journey of how women have attained the current legislative regulations pursuant to sexual harassment in decades as well as in terms of significant achievements as follows:

1969: The first women’s studies program. Enloe emphasized the importance of this year for women as the first women’s studies program was started in the University of California San Diego. She said, “It was a serious intellectual collective project to make sense of the world by taking women seriously. By 1976, we offered the first courses. These are the most important dates in the history of human-kind, but they are also interesting to position ourselves today.”

1979: Enloe, also referring to the United Nations General Assembly meeting, said, “The passage of the Convention on the Elimination of All Forms of Discrimination Against Women (CEDAW) was 34 years after the founding of the United Nations. USA and Sudan did not ratify the convention. The second important topic is the naming of sexual harassment: for the first time in print an intellectual journal in public form referred to sexual harassment.  Sexual harassment is a pattern of violence against women. If you can’t name something, it is really hard to challenge it.

1987 Women’s March Against Battering. Women were out in the streets in those times. “I learned that a women’s march against violence in 1987 took place in Istanbul, at Yoğurtçu Park.”

1993: Enloe expressed her witnessing to the incredible success of transnational feminist activists who attended the UN Conference on Human Rights held at Vienna to end violations of women’s human rights. She said, “Human rights have to be understood through a gender-frame. Violence against women should be included as one of the major violations of human rights. Domestic violence, wartime systematic rape… Are all of them violations of human rights? These were the topics discussed and transnational feminist activists came to Vienna to insist on inclusion of such matters.”

1994: Enloe, referring to a hearing in Arusha Court held by United Nations Security Council for prosecutions of Ruanda Genocide, expressed that for the first time in the history of humankind, a man was convicted for an autonomous charge of wartime rape. She mentioned, “He was convicted for war crime of rape because of his radio strips. Besides, at the time, in the criminal court held in Lahey for Yugoslavian war crimes, it was being attempted to pass the law on rape as a war crime.”