The winners of the Şirin Tekeli Research Awards, organized by Sabancı University Gender and Women's Studies Center of Excellence (SU Gender) in memory of Şirin Tekeli, who conducted pioneering work on democracy, academic freedom, gender equality, and feminism, were announced at an online award ceremony and conference. 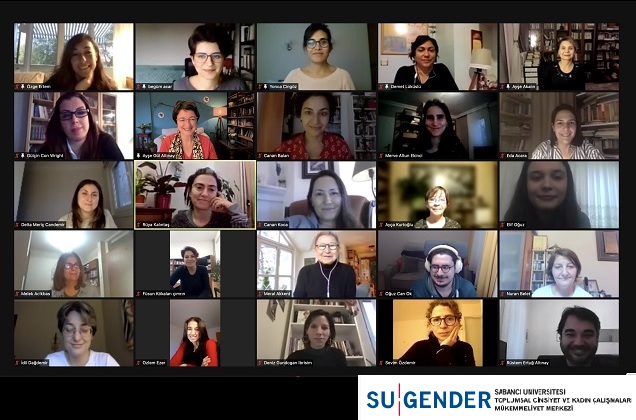 The Research Awards organized by Sabancı University Gender and Women's Studies Center of Excellence (SU Gender) in memory of Şirin Tekeli, who conducted pioneering work on democracy, academic freedom, gender equality, and feminism, were given for the 5th time at an online conference this year. This year’s winners of the Şirin Tekeli Research Awards for supporting and encouraging gender-focused research in Turkey were Canan Balan, Delta Meriç Candemir, Eda Acara & Ayça Kurtoğlu, Merve Altun Ekinci & Canan Koca and Rüya Kalıntaş.

SU Gender has organized the Şirin Tekeli Research Award Ceremony and Conference since 2017 in order to contribute to the preservation, sharing, and diversification of the rich heritage left by Şirin Tekeli. Applications of doctoral students and researchers who completed their doctoral studies no more than 15 years ago were accepted for the awards. Research proposals were evaluated by an intercollegiate selection committee on the basis of academic criteria.

Speaking at the opening of the conference, Hülya Adak, the Coordinator of Sabancı University Gender and Women's Studies Center of Excellence (SU Gender), said the following: “We started to hold the Şirin Tekeli Research Awards and conference in 2017, the year Şirin Tekeli passed away. Over the last 5 years, we have provided support to 36 researchers. We are glad to bring together researchers working in the field of gender research on the occasion of our award and conference ceremony that we are holding for the fifth time this year. We are currently preparing a book about the award-winning studies so far. We want to share this book with you during next year’s award ceremony and conference”.

The opening speeches of the event were delivered by Ayşe Gül Altınay, member of Sabancı University Faculty of Arts and Social Sciences and former director of SU Gender, and Meral Akkent, a feminist sociologist, and the concept developer and founding curator (2010-2021) of the Istanbul Women’s Museum, the first women’s museum in Turkey and the third in the world.

During the opening session, which was entitled “Şirin Tekeli: Growing by Making Others Grow”, the work of Şirin Tekeli in the field of democracy, academic freedom, gender equality and feminism was discussed. Ayşe Gül Altınay said she was proud to commemorate Şirin Tekeli, who had a very important place and role in the feminist movement and academic literature, and to come together, albeit online, with young researchers in order to get inspiration from their work on the occasion of the awards given in her name. She continued: “Like Şirin Tekeli, Meral Akkent made creative contributions to gender research and the feminist movement in Turkey, and produced many works opening new horizons for us. Opened in 2012 under the leadership of Meral Akkent and with the participation of many volunteers, the Istanbul Women’s Museum opened a brand-new feminist window on the long history of Istanbul. Without this museum, which enhanced and transformed our knowledge by adding new and exciting discoveries about the history of

this city, our Curious Steps walks that we carry out as SU Gender would never be complete. Meral Akkent is taking a new and exciting step now by establishing the Istanbul Gender Museum”. Mentioning the many conferences and exhibitions that they organized as SU Gender with Meral Akkent and the Istanbul Women’s Museum, Altınay added the following: “We invited Şirin Tekeli to deliver an opening address at the Gender Inequality in Academia: International Best Practices symposium that we co-organized in 2014. She could not join us due to her illness, and I was really touched as I read out her impressive speech to the audience at the event. Today, it is a great honor for me to listen to Meral Akkent talk about Şirin Tekeli. Meral Akkent had a long time together with Şirin Tekeli and opened up inclusive, encouraging and nourishing feminist spaces that unleash creative discourse, curiosity and excitement, just like Şirik Tekeli did. On behalf of us all, I would like to thank Meral Akkent, who is also on the International Advisory Board of SU Gender, for her contribution to SU Gender, starting with Curious Steps, and to the feminist movement and gender studies in Turkey.”

THE ISTANBUL GENDER MUSEUM IS BEING ESTABLISHED 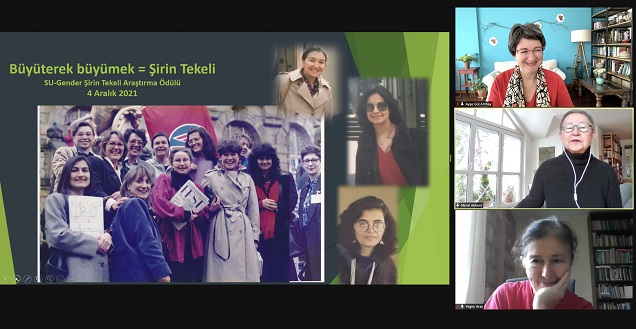 Pointing out that thinking of Şirin Tekeli always made her feel good, Meral Akkent said she met Şirin Tekeli at a conference in Germany in 1989. She continued as follows: “We lost Şirin Tekeli at the age of 73 in 2017; we are never complete without her. Şirin’s passion and ability to support young academics make her a real idol. She grew by making others around her grow. Continuing the tradition of the Şirin Tekeli Research Awards, SU Gender developed a program supporting young academics, in perfect harmony with Şirin Tekeli’s life practice. Creating and continuing this program, which is a small oasis for academic productivity in the period of depression that academia in Turkey has been going through since the 1980s, is an important action per se. I would like to extent my special thanks to SU Gender team, who organized the Şirin Tekeli Research Awards and Conference”.

Highlighting that Şirin Tekeli was among the founders of many important institutions, including the Human Rights Society, the Foundation for Library and Information Center for Works by Women of Istanbul, the Mor Çatı Women's Shelter Foundation, the Helsinki Citizens' Assembly of Turkey, and the Woman Candidates Support and Education Society (KA-DER), Akkent continued as follows: “Şirin Tekeli encouraged and gave wing to women near and far, particularly young women in academia because she personally experienced in her youth how difficult things were for women academics and she observed that the challenges remained. Şirin pointed to the need to rebuild a democratic society based on gender equality each and every day. And it is possible to find the strength to do it through solidarity, in other words, with Şirin Tekeli’s model. Good examples of such efforts include SU Gender in academia, and museums, which are supposed to be dynamic forums where justice is demanded, in cultural activism. Currently at the establishment phase, the Istanbul Gender Museum will provide alternatives to traditional ways of thinking as a dynamic forum nourished by feminist theory and practice. This museum will open up new spaces for dialogue based on Şirin Tekeli’s model.”

As part of the conference, two separate panels were held in which researchers who won the Şirin Tekeli Award last year shared their work. During the first panel, Ayşe Akalın and Demet Lüküslü, the winners of the last year’s Research Award, shared the results of their research entitled "There is a huge rage and I can feel it in my veins: Young Feminists from Turkey”, and Yonca Cingöz shared the results of her research entitled “Sentiments circulating in the feminist movement: Clues of an archive of sentiments from the 2000s”.

During the second panel, Füsun Kökalan Çımrın and Gülçin Con Wright, the winners of last year’s Research Incentive Award, revealed the outputs of their research entitled “It turns out that we are really activists!”, and “Grandparenting and grandchild care experiences at late stages of life”, respectively. The conference was completed with the online award ceremony.