Dr. Fatih Birol has been reappointed, by unanimous vote, as the President of the International Energy Agency for the third time 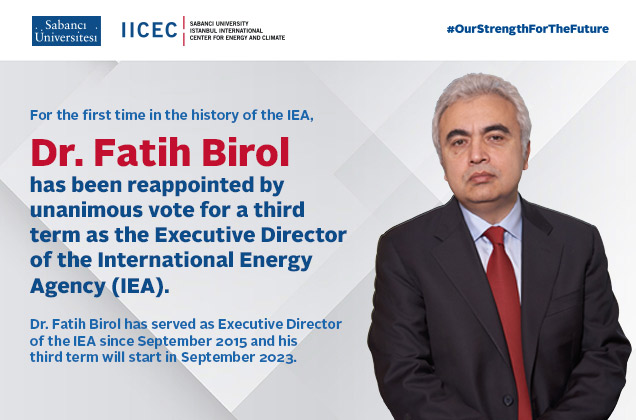 For the first time in the history of the IEA, Dr. Fatih Birol, who has served as Executive Director of IEA, has been reappointed by unanimous vote of The Governing Board of the International Energy Agency.

It has been announced that Dr. Birol, who has served as Executive Director of the International Energy Agency (IEA) since 2015, has been reappointed at the IEA Ministerial Meeting on 23-24 March.

In the press release by IEA, it has been stated that reappointment of Dr. Birol comes at a pivotal moment for IEA and the global clean energy transformation and The Governing Board of the International Energy Agency giving him strong backing to lead a new era for the IEA.

Dr. Birol stated that he is honoured to run for the third term and said “I’m honoured that IEA members have put their trust in me to lead the Agency into a new era following what I believe may turn out to be the most consequential Ministerial Meeting in the IEA’s near 50-year history. The energy world is changing fast and needs to change faster still. With our new mandates we are now ready to respond and chart a new course for the IEA, not just for the next two years but for decades to come. My energy, enthusiasm and commitment to lead my outstanding colleagues within the IEA Secretariat and to serve our Member Governments have never been stronger.”

Dr. Birol has joined IEA as a young analyst and he took on various duties for 20 years before being elected Executive Director of the IEA. Dr. Birol has been appointed as IEA President in 2015. Dr. Birol is also the founder and the chairman of the IEA Energy Business Council, one of the most dynamic business groups in the international energy industry.

In 2022, Dr. Fatih Birol has been awarded the "Legion d'Honneur", the highest state decoration of France. In 2021, he became the only Turk to be on the TIMES 100 "World's 100 Most Influential People" list. Listed as one of the world's most influential people in energy by Forbes magazine, Birol has been named the "Energy Person of the Year" in 2017 by the Financial Times Newspaper.

Dr. Birol also chairs the World Economic Forum's (Davos) Energy Advisory Board and is a member of the UN General's “Energy Sustainable for All” Advisory Board.

Dr. Fatih Birol has been honored by many states and international organizations throughout his career, including the Order of "Rising Sun" of the Emperor of Japan Akihito, the "Royal Order of the Pole Star" of the King of Sweden, and the highest Presidential decorations of Austria, Germany and Italy.

Dr. Birol has been awarded a Doctorate of Science honoris causa by Imperial College London at the Royal Albert Hall on 23 October 2013. Fatih Birol has been an honorary life member of Galatasaray Sports Club since 2013.