David Hockney is now on view at the Sakıp Sabancı Museum, supported by Akbank

David Hockney's The Arrival of Spring, Normandy, 2020, organized by the Sakıp Sabancı Museum with the support of Akbank, opens on Wednesday, May 11th. The exhibition consists of 116 iPad paintings heralding the arrival of spring. David Hockney, one of the most inspiring artists of the 20th and 21st centuries, made them on his iPad at his home in Normandy, during the first wave of the Covid-19 pandemic. 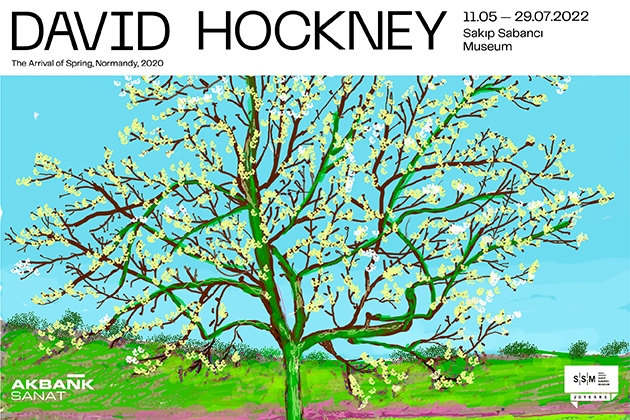 The iPad paintings in The Arrival of Spring, Normandy, 2020; depict a landscape filled with fruit trees, bushes, flower beds, ponds and rivers, fields, and distant hills; capturing the annual cycle of spring from bare trees to buds, flowers, and abundant green foliage. The exhibition is a celebration of spring, reminding us of the miracles of the natural world and its constant renewal. 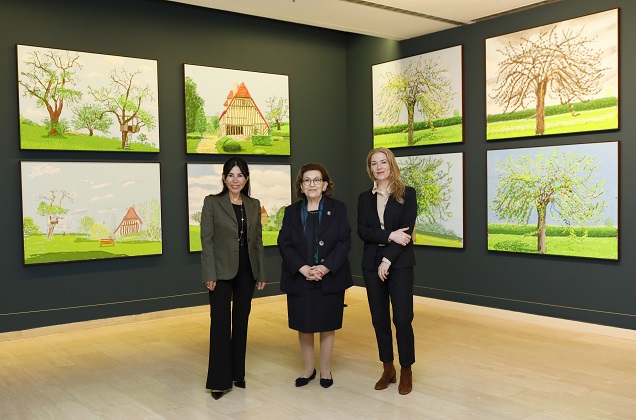 At the meeting, SSM Director Dr. Nazan Ölçer said, ‘We are excited and proud to host the exhibition, The Arrival of Spring, Normandy, 2020, in which works by one of the most significant artists of our time, David Hockney, have come to Turkey for the first time, on the twentieth anniversary of the Sakıp Sabancı Museum. Throughout the long history of humanity’s surrender to the frightening power of nature, spring has always been the symbol of rebirth, of emerging from darkness. With spring, the darkness is now illuminated, living beings are awakened from their long slumber; the mother earth, the origin of all life, spreads seeds of fertility, and this cycle continues forever.

With his lifetime of wisdom, and utilizing 21st century technology, David Hockney has faithfully recorded each moment of nature’s reawakening through the season and invites us to witness a spring ritual in The Arrival of Spring, Normandy, 2020. The exhibition is, in essence, the story of a season from beginning to end, acting almost as a blessing. With this show, David Hockney reminds us of the miracles of nature, the constant and irrepressible renewal of the cycle of life, and of his often-repeated theme: ‘love life’. I hope that this exhibition, celebrating the rebirth of nature and spring, will be a source of hope and joy for all of us, after an immensely difficult two-year period of global lockdowns, in which we were all disconnected from the real world. I would like to thank our perpetual collaborator Akbank, and its Executive Chairperson, dear Suzan Sabancı Dinçer.

I salute the great artist, David Hockney. I would like to express my gratitude to him for creating these inspiring artworks and for choosing us for their exhibition, following the Royal Academy of Arts in London and Bozar in Brussels, and before the final venue at the Art Institute of Chicago. These artworks, as pure and naive as children's paintings, are gifts from David Hockney, an ageless artist, to the people of an ageless world.’ 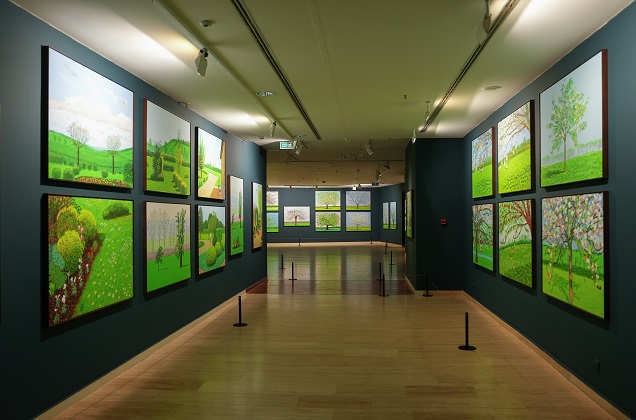 Expressing her joy at the biennial collaboration between Akbank and the Sakıp Sabancı Museum, hosting significant representatives and movements of contemporary art in Istanbul, Akbank's Executive Chairperson, Suzan Sabancı Dinçer, said, 'This year, with the Sakıp Sabancı Museum, we are hosting David Hockney, one of the eminent artists of our time, with this magnificent exhibition titled 'The Arrival of Spring, Normandy, 2020', highlighting the joy of spring in nature. This major project, which will have a global impact, is David Hockney's first large-scale exhibition in Turkey. We are incredibly proud to be able to promote Istanbul and our country properly through this exhibition.'

Edith Devaney, curator of The Arrival of Spring, Normandy, 2020 exhibitions, said, ’First of all, I am happy to be in Istanbul on a beautiful spring day. I would like to thank my dear colleague Dr. Nazan Ölçer and her team for making Sakıp Sabancı Museum the third museum venue to host the exhibition displayed at the Royal Academy of Arts last year, and then at Bozar in Brussels. I would also like to thank Akbank and its Executive Chairperson, Suzan Sabancı Dinçer, for supporting the exhibition.

David Hockney is regarded by critics and historians as a crucial artist of the 20th and 21st centuries. The mass fascination with Hockney makes him a phenomenon in the art world. He has always followed his own artistic interests and many curiosities. While doing this, he did not care for trends, turned to his past and to his deep knowledge and interest in art history, which is often expressed in his artworks. He believed that his use of technology was about discovering new ways of painting, although his interest in technology was sometimes misinterpreted. Indeed, in an interview, he said that Van Gogh and Monet would love iPad for the same reasons he did. 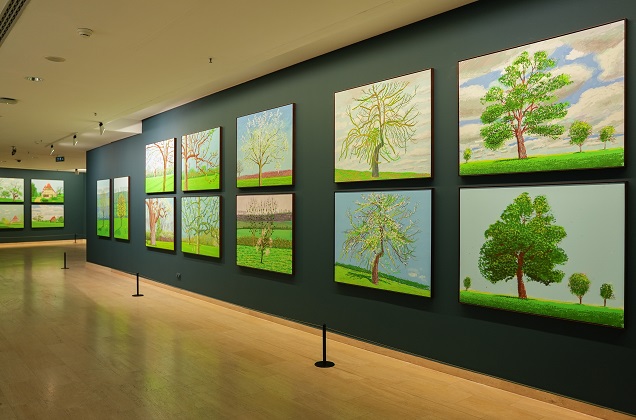 In his own words, David Hockney is an artist who has depicted ‘the arrival of spring’ before. In 2011, he produced works using the iPad for the first time in Yorkshire, and these were displayed in the ‘A Bigger Picture’ exhibition at the Royal Academy of Arts. This was Hockney's first work produced using this new tool. In 2013, he took up the same subject, this time, depicting spring in a series of charcoal-on-paper works in Yorkshire. In 2020, he decided to capture the spring in Normandy, but this time, the pandemic began. With the idea of drawing colours more freely, and working in layers, he chose the iPad once again. David Hockney knew that the speed with which to see a scene, a subject and capture its salient and fleeting aspects is fast on the iPad. Besides, there was no need for canvas preparation or mixing the paint and then waiting for it to dry. He produced 116 images in a period of four months. The sheer beauty of the paintings in Monet's garden in nearby Giverny was a source of inspiration for Hockney during his time in Normandy. The Arrival of Spring, Normandy, 2020 gives the viewer a strong sense of the unfolding of time. I believe that all art lovers will leave this exhibition with extraordinarily pleasant feelings.’

The Arrival of Spring, Normandy, 2020, opening at the Sakıp Sabancı Museum with Akbank’s support between May 11 and July 29, also heralds a return to face-to-face events within the scope of the exhibition. Spring will be experienced to the fullest at the SSM, with the children's education programs held as part of the SSM Learning Program, adult education programs under the title of Akbank Art Talks, as well as film screenings and workshops designed in collaboration with Mimar Sinan Fine Arts University.