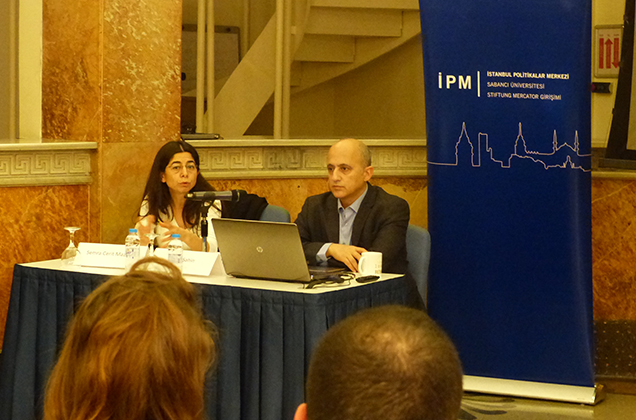 Having taken part in the conference in Poland, panelists shared the outcomes of Katowice, Turkey's current status under the climate change regime, and other notable moments from the event with academics, civil society representatives and the public.

Speakers noted that the objective of Katowice was to draw a roadmap for establishing guidelines practicable by all parties of the Paris Accord and reinforcing the climate preservation efforts of countries.

“The most important study was the 2018 Global Carbon Budget prepared by over eighty scientists led by Corinne Le Quéré from the Tyndall Center. One of the two major reports was IPCC’s (Intergovernmental Panel on Climate Change) 1.5 degree special report issued 2 months ago, and the other was the 2018 edition of the United Nations Environment Program's annual Emission Deficit Report. The official reports issued by international institutions under the UN, which must be adopted as guidelines by all countries, necessitate immediate action.”

“All countries in the world emit billions of tons of greenhouse gases to the atmosphere by burning coal, oil and gas. Carbon dioxide accounts for three quarters of all emissions. Greenhouse gas emission levels remained stable from 2014 to 2016; it seemed as if the rise was checked. But emissions started rising again in 2017, and increased by 1.6% compared to the previous year. This year, the rate of increase was 2.7% compared to 2017.

Saying that the 2.7% global increase in emissions was led by India (6.3% increase), China (4.7%) and the US (2.5%), Ümit Şahin stated “The rate of increase in the emissions of other fast-growing or developing countries, including Turkey, was 1.8%. The EU reduced its total emissions slightly (by 0.7%), but this is too low for what used to be the one-time climate champion. It has no bearing on the total.”

“If global warming rises from its current level of 1 degree to 2 degrees, all coral reefs die, icecaps in the North Pole and the Alps melt completely, and sea level rises by at least 1 meter. If we warm the world for more than 2 degrees, glaciers in Greenland melt, followed by Western and then Eastern Antarctic glaciers; the oceans become even more acidic; Amazon rainforests and Boreal forests are destroyed; Gulf Stream stops; and Siberian permafrost thaws. These of course have planetary effects. At this point, climate change becomes uncontrollable, and all of the possibilities I have just mentioned may occur until the end of this century. If emissions were to continue rising, we have only 30 years left before we feel the effects of 2-degree increase. The only way to stop this is to arrest global warming before it reaches 1.5 degrees. The IPCC report says this is still possible, and spells out a method: Halve global greenhouse gas emissions by 2030, and make it net zero by 2050 (or, not emit more carbon than can be absorbed by plants and the ocean). The formula translates to reducing emissions by half every 10 years. In other words, if emission levels in 2030 are half of what they had been in 2020, half of the 2030 level in 2040, and then half of the 2040 level in 2050, this amounts to 5 to 6 billion tons of greenhouse gas emissions by 2050, which means net zero.”

Carbon tax will impose a great burden on low-income citizens

2017/18 Mercator-IPC Fellow Pınar Ertör Akyazı emphasized the need to consider social justice when spending carbon tax revenues, saying that only a quarter of this revenue was used to benefit low-income populations in the French example, which created another source of inequality. Ertör noted that carbon tax would impose a great burden on low-income citizens, which could be alleviated using different policies, but required transparency in taxation to achieve.

Paris targets are inadequate: The emission deficit will be 32 billion tons in 2030

Ümit Şahin said that urgent action was needed, and continued: “If the current increase is to continue, total global greenhouse gas emissions become 65 billion tons in 2030. However, according to the report, we must not emit more than 40 billion tons of greenhouse gases in 2030 if we are to keep global warming below 2 degrees. In other words, 13 billion tons less than today. If we are to do what we are supposed to do and halt global warming before it reaches 1.5 degrees, we must have reduced emissions to 24 billion tons by 2030. This is less than half of the present level. In order to compensate for the 32 billion tons of carbon deficit that will have occurred by 2030 according to the Paris targets, we need to start reducing emissions now, and radically. The Paris target is too low since we need to reduce 3.5% per year. There is good news though: The urgent action plan is viable from both technological and financial perspectives. According to the report, it is crucial to add the commitments of provinces, local administrations and other multiparty initiatives to national commitments in order to close the gap. However, if we are late to act, the ship will sail and today's technology will be inadequate to combat climate change after 2025. Then, we either wait for a miracle to happen, or try to survive in a world that is 3.5 to 4 degrees warmer."

Saying that the outcomes of the summit were less than positive, Marmara University Political Science and International Relations Department Faculty Member Semra Cerit Mazlum noted that the Poland summit was a crucial step in the "climate process" that began with Copenhagen, that work would need to be done faster than the schedule proposed in the summit, and that while no progress had been made for the last three years, some alternative solutions could also be detrimental to progress. Mazlum continued that the key outcome of the summit was the drive to reinforce mutual trust among countries rather than focusing on the content of agreements, and that steps were taken to ensure the transparency of the reporting system that was commissioned after Copenhagen.

COP24 fails in terms of transparency and civil society engagement

Saying that the current oppressive Polish government's attempts at silencing civil society were unacceptable, 2018/19 Mercator-IPC Fellow Cem İskender Aydın continued that the post-COP resolution failed to prevent climate change in time and ensure climate justices, and that resolutions on important matters were often inadequate. Aydın argued that lauding COP-24 as a "democratic success" pushed the shortcomings to the background, and that while the Paris Accord was non-binding and weak in content, it carried vital importance due to the targets it brought, and required more aggressive and stringent guidelines for proper implementation.

On the other hand, Aydın cautioned against COP24’s vulnerability to lobbying by international fossil fuel companies, and its severe issues in transparency, saying that COP24 was a failure in terms of transparency and civil society engagement, where most important decisions are made behind closed doors.

Turkey is a solar country, therefore a renewable energy country

Panelists stressed the need for Turkey to realize its own potential and make a genuine assessment of its energy sources and current situation, saying that Turkey was a solar country that needed to determine its position and discourse accordingly.

The panel concluded with a general discussion on Turkey's position in global developments, its climate policies, global demands, and local issues concerning climate change with academics, civil society representatives and members of press attending the conference.

Since 2001, IPC has provided decision makers, opinion leaders, and other major stakeholders with objective analyses and innovative policy recommendations.