Women's participation in decision-making in higher education should be encouraged

The second international conference of the Horizon 2020 GEARING Roles Project, supported by the European Commission, was hosted by Sabancı University's Gender and Women's Studies Center of Excellence (SU Gender). In the online conference organized on 9-10-11 November 2020 with the theme of Gender and Leadership in Higher Education and Research, the participants shared their views related to various subject from women's representation in universities, research institutions, civil society organizations, and local governments to gender equality action plans. 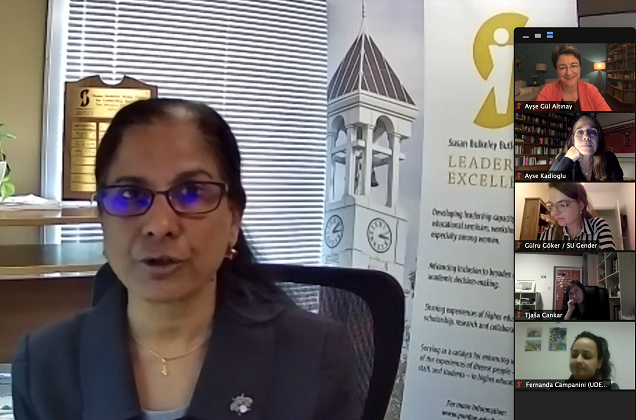 Sabancı University Gender and Women's Studies Center of Excellence (SU Gender) hosted the second international conference of the Horizon 2020 GEARING Roles Project, supported by the European Commission. The conference, which took place online between 9-11 November 2020, discussed many topics to eliminate gender inequalities in representation and decision-making in higher education.

Professor Mangala Subramaniam, Butler Chair and Director at Purdue University, was the keynote speaker of the conference on Gender and Leadership in Higher Education and Research, and shared her experiences and suggestions related to gender equality in higher education under the heading “Leadership to Transform Institutions”. Stating that women make up the lowest-paid group among top executives at US universities, Professor Subramaniam added that the picture was even worse for non-white women. Pointing out to the importance of both institutional structure and process change for effective transformation, Mangala Subramaniam stated that structures lacking transparency slowed down institutional change. Subramaniam emphasized that the low number of women in leadership positions in higher education should be questioned, and also made suggestions on how women's voices and opinions could be included in decision-making processes.  According to Subramaniam, leadership for corporate transformation requires both emotional and intellectual labor, and on the way to inclusion, leaders need to “develop collaborations at the corporate level, not just at the individual level.” 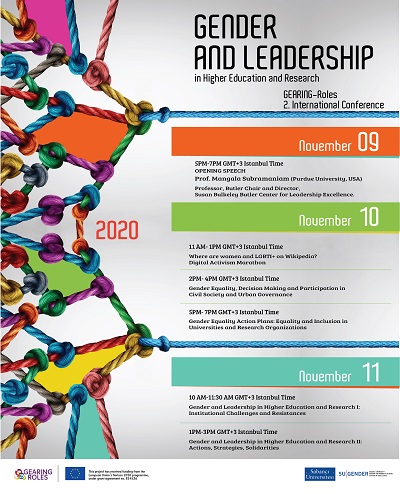 Subramaniam, who said that the election of Kamala Harris as Vice President in the last election in the United States created hope for the fight against gender-based, racial, and ethnic identity-based inequalities and opened the door to new opportunities, gave the following advice to women about leadership:

“Be clear about mutual expectations for a coherent vision. This makes independence possible. There is a fine line between transparency and privacy. You have to pay attention to that.  Aim for full promotion and build confidence. Research your role models, especially in the academic world, and do not give up on the role models you chose for yourself. And most importantly, make alliances for yourself and make men your allies.”

Ayşe Kadıoğlu, a faculty member at Sabancı University, said that this conference, which took place after Kamala Harris was elected Vice President of the United States, was a great hope for gender equality.

European Commission Project Officer Athanasia Moungou shared the following in her speech: “According to the EU Commission figures, 48% of doctoral graduates are women. However, as we climb the academic ladder a little further, gender inequality increases. At professor level, women make up just 24% of the workforce. This also applies to women authors, the ratio of female authors is just 32%. The ratio of female patent applicants is 9%. We want to fix the system, not just the numbers.” Addressing the growing importance of gender within the framework of European Commission projects, Mongou also mentioned that plans for institutional gender action would be among the conditions for applying to new framework programmes.

Prof. Dr. Meltem Müftüler Baç, Dean of the Faculty of Arts and Social Sciences of Sabancı University, stated that gender inequality was a serious problem in the academic world in Turkey, and said: “We see that the output of female researchers is less than that of men. The burden of female researchers is greater than that of male researchers. If a man submits 5 articles a year, that figure drops down to half for a woman. Because a woman has a lot of different things to do in her everyday life with her family. The pandemic has also created a very different situation. Female researchers are able to devote much less time to academic studies than before the pandemic. That is one of the reasons why men and women perform differently. We need leaders who recognize the challenges that women face.”

Hülya Adak, the Director of SU Gender, said: "As SU Gender, we are working to create an environment with pluralism and inclusiveness, where there is no discrimination. Instead of operating as a marginal and university-independent center, we want to radically transform the university. We aim to achieve gender equality at the university through the GEARING Roles Project.”

SU Gender GEARING Roles coordinators Ayşe Gül Altınay, Zeynep Gülru Göker, and İlayda Ece Ova stated that they created a Gender Equality Action Plan at the end of a participatory “co-creation” process at Sabancı University within the scope of the project and said: “About 100 faculty members, administrative employees, and students contributed to the preparation of this action plan. We created it together. We know that we will all own it together.”

The “Gender Equality Actions in Research Institutions to traNsform Gender Roles” (GEARING Roles) Project, in which SU gender is a project partner, is being carried out with 10 partner institutions in 6 European countries with EUR 3 million funding received from the European Commission's Horizon 2020 Programme. The project, which started in November 2019, is expected to last 4 years.

Gülseren Onanç, President of the SES Equality and Solidarity Association, stated that in countries with female leaders, the pandemic process was managed more successfully compared to countries run by men. Onanç said: “Female leaders have shown how they can take a good approach to solving clogged systems. From New Zealand to Germany, from Finland to Taiwan, these female leaders have certain characteristics in common: They are very competent and experts in their fields, they do not just look at the issue of equality on the female plane, they believe in holistic equality. Because they themselves come from the struggle, their ability to empathize with equality is high, and they can make decisions quickly. They have demonstrated how quickly they make decisions compared to numerous men and they have managed to protect their countries against the pandemic.” 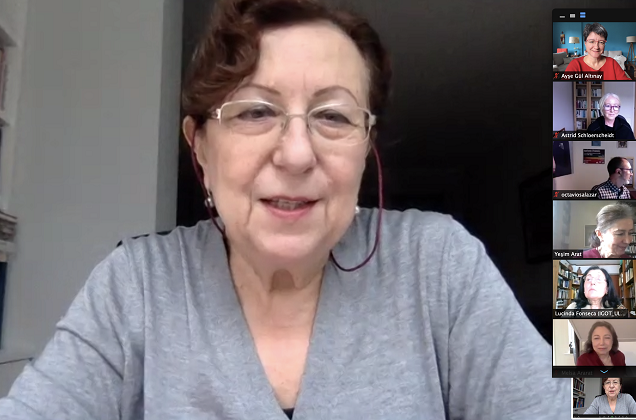 In a session where the participants share information about projects carried out in various Turkish universities within the scope of European Commission projects; Ayşe Güneş-Ayata, Mary Lou O’Neil and Nurseli Yeşim Sünbüloğlu also shared information about the institutional efforts on gender equality at METU, Kadir Has University, and Özyeğin University. The importance of cooperation between universities was emphasized in this session.

Director of the Corporate Governance Forum of Sabancı University Melsa Ararat, who made a presentation entitled “Strategies and Solidarity for Leadership That Supports An Egalitarian Future from ‘He for She’ to ‘We for She’” in the second session held on 11 November, Wednesday with the theme of “Gender and Leadership in Higher Education and Research, said: “Studies conducted among female leaders in the field show that women are better at 17 of the 19 competencies required for leadership. Why is the change so slow when female leaders are so successful? Standardization and prejudice stand out as the reasons behind the low ratio of women.” Zehra Sayers, a faculty member at Sabancı University, emphasized that the real important issue related to gender equality was a change in mindset.

Maria Lucinda Fonseca, a Professor of Human Geography and Migration Studies at the University of Lisbon, Milica Antić Gaber, a Professor of Sociology at the Faculty of Arts, University of Ljubljana, Astrid Schloerscheidt, Pro Vice-Chancellor and Dean at the Faculty of Health and Life Sciences, Oxford Brookes University, also participated in the session. Another participant of the session and a member of the Advisory Board of the GEARING Roles Project, Octavio Salazar, a Constitutional Law Professor at University of Cordoba, said that the contribution of men was very important for the positive transformation in universities which are masculine spaces.