The “2020 Şirin Tekeli Research Awards” organized by Sabancı University Gender and Women's Studies Center of Excellence (Su Gender) in memory of Şirin Tekeli, who had conducted pioneering work on democracy, academic freedom, gender equality, and feminism, were presented to their winners. The winners of the research awards, given since 2017 in order to preserve, share, and diversify the rich heritage left by Şirin Tekeli, were announced as part of the Şirin Tekeli Research Award Ceremony and Conference which took place online this year. 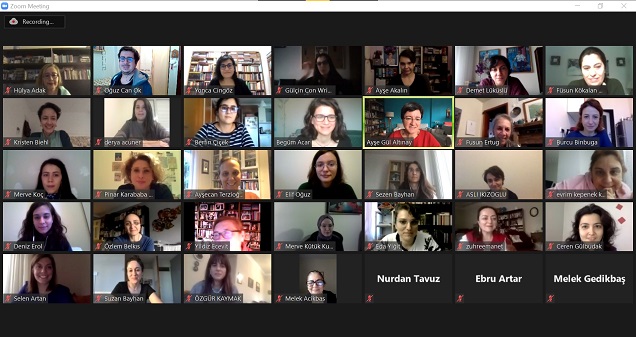 The Research Awards given by Sabancı University Sabancı University Gender and Women's Studies Center of Excellence (Su Gender) in memory of scholar Şirin Tekeli, who had conducted pioneering work on democracy, academic freedom, gender equality, and feminism, were presented to their winners with an online conference.  SU Gender has been organizing the Şirin Tekeli Research Award Ceremony and Conference since 2017 in order to contribute to the preserving, sharing, and diversification of the rich heritage left by Şirin Tekeli.

Applications of doctoral students and researchers who had completed their doctoral studies no more than 15 years ago were accepted for the award given for the fourth time this year. Research proposals were evaluated by an intercollegiate selection committee on the basis of academic criteria.

The conference, which brings together authors and researchers in the field of gender and women's studies, took place online this year. Speaking at the opening of the conference, Hülya Adak, the Director of SU Gender, said: “This year, we are having our first online award ceremony and conference. We started to hold the conference in 2017, the year Şirin Tekeli passed away. We want to expand our topics a little more next year. We hope that these awards focusing on the social sciences and humanities will be supplemented with new awards on climate justice, disabilities, and gender studies. Over the past 3 years, we have supported 27 studies. We want to compile these studies as a book next year and publish them in 2021 or later.”

As part of the opening ceremony, Ayşe Gül Altınay, a Faculty Member at Sabancı University and the former Director of SU Gender, had an online interview with Füsun Ertuğ, one of the founders of the Women's Works Library and Information Center Foundation. Noting that it is an honor to come together, even in an online environment, to commemorate Şirin Tekeli, whose role and place in the feminist movement are very important, Ayşe Gül Altınay pointed out the role of Füsun Ertuğ in the feminist movement. Altınay said, “This year, we are celebrating the 30th anniversary of the establishment of two very important institutions of the feminist movement in Turkey, the Library of Women's Works and the Purple Roof. We are very grateful to everyone who founded and preserved the Women’s Works Library and kept it alive as a very valuable research, archive, and meeting place for all of us. Füsun Ertuğ is a researcher, activist, and archivist who has made a significant contribution to the creation of the visual and written archive of the feminist movement since the early 80s. It is a great honor and joy to be commemorating Şirin Tekeli with Füsun Ertuğ, who have conducted a wide range of pioneering works from creating a visual archive of Solidarity March Against Beating and Carie Festival held in March 1987 to creating the Women's Works Library with Şirin Tekeli and telling the story of the creative relationship that women in different regions of Turkey established with medicinal plants and soil through ethnobotanical research.”

Füsun Ertuğ stated in her speech that it was very meaningful for Sabancı University to give such an award on behalf of Şirin Tekeli and said:

“A gift to Şirin Tekeli's efforts to support scientific research. It is really important that Şirin Tekeli brings us all together and ensures institutionalization. Today, we celebrate the 30th anniversary of both the Women's Works Library and Information Center Foundation and Purple Roof Women’s Shelter Foundation. The library is a joint achievement of the women's movement. Many women who are pioneers of women's movements, especially Şirin, donated their private archives to us. Amazing results will be achieved when researchers start working on them first-hand. This, in turn, will reveal how rich the shared heritage of women in Turkey is.”

As part of the conference, two separate panels were held in which researchers who won the Şirin Tekeli Award last year shared their works. On the first panel, the following researchers shared their results: Sezen Bayhan – “The Evolution of Gendered-Militarized National Identity Building in Textbooks and Curriculum", Z. Selen Artan – “Darülbedayi's “other” Women: Theatre and Social Memory from The Ottoman Era to The Republic”, Derya Acuner - “Notes from The First Year of A Study on The Political Connotations of Fabric in Turkish Contemporary Art.”

On the second panel of the conference, the following researchers who had won the Research Incentive Award last year shared their results: Burcu Binbuğa – “The Ecology Struggle from The Ecofeminist Perspective”, Pınar Karababa Demircan – “Intersecting and Evolving Forms of Women's Labor: Examples of Silk Carpet and Kutnu Weaving”, Merve Koç – “Experiences of Masculinity in The Normative Body: The Discourse of Hegemonic Masculinity and Dwarf Men”, Özlem Ezer - “The Religion and Beliefs Living in The Narratives of Syrian Refugee Women.”

The conference ended this year with an online ceremony where the winners were presented with their awards.

Sexual Harassment, Gender Based Violence and...