The number of female students who choose to study in STEM fields at Sabancı University has risen by nearly 40% in the last five years.

Selmiye Alkan Gürsel, Vice Dean of Sabancı University Faculty of Engineering and Natural Sciences, spoke to gazeteSU on February 11, the International Day of Women and Girls in Science. Gürsel said, “It is highly important to enhance female students’ interest in and awareness of STEM fields and that they be actively involved in these fields both for the development of science and for sustainable development.” 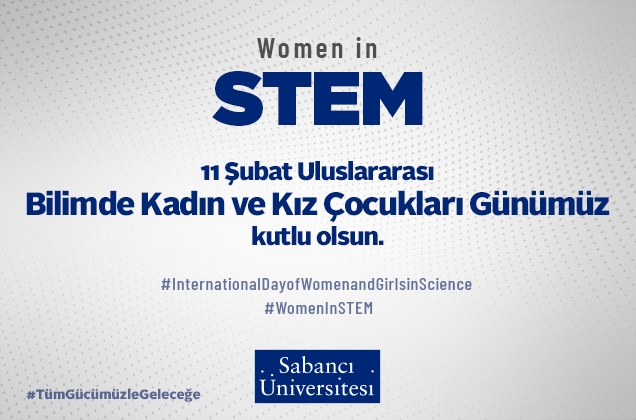 The interest of female students at Sabancı University in STEM fields has grown both at the undergraduate and the graduate levels. Since 2016, the number of female students in the Faculty of Engineering and Natural Sciences has grown by 35% at undergraduate level and 45% at graduate level. Selmiye Alkan Gürsel emphasized that with this growth averaging nearly 40%, it was highly important to enhance female students’ interest in and awareness of STEM fields and that they be actively involved in these fields both for development of science and for sustainable development. She continued, "Active involvement of women will help to expand different perspectives and creativity, to develop our capacity to change the world and innovate in these fields, and to create generations that are capable of utilizing science and technology in a harmonious way.”

The biggest increases are in Computer Science and Mechatronics Engineering programs

Specifying that the biggest increase in the number of female students were in the Computer Science & Engineering and the Mechatronics Engineering programs at undergraduate level, and in Materials Science & Nano Engineering, Molecular Biology, Genetics & Bioengineering, Manufacturing Engineering, Mechatronics Engineering, and Mathematics at graduate level, Gürsel touched upon the importance of the role of women in STEM fields to science and society, and made the following recommendations to female students: ‘Be aware of your capabilities inherent to you as women such as versatile, critical and creative thinking, problem solving, empathy, entrepreneurship and leadership. Believe and have confidence in yourself and be determined. Work hard and never lose hope. Remember that you can make innovations that can change human life, generate new technologies and solve problems that no one else can.’