Dr. Fatih Birol is on the TIME Magazine’s “The Most Influential People of 2021” List

Executive Director of the International Energy Agency (IEA), Dr. Fatih Birol is included in TIME 100 list of “the World’s Most Influential People in 2021”. Also acting as the Honorary Chairman of Sabancı University Istanbul International Center for Energy and Climate Change (IICEC), Dr. Birol is the only person from Turkey on the list. Former Secretary of State of the US and the US Special Presidential Envoy for Climate, Kerry speaks highly of Fatih Birol and says, “A trusted counselor to world leaders, Birol is an objective authority on what it will take to slash carbon emissions and save our planet.” 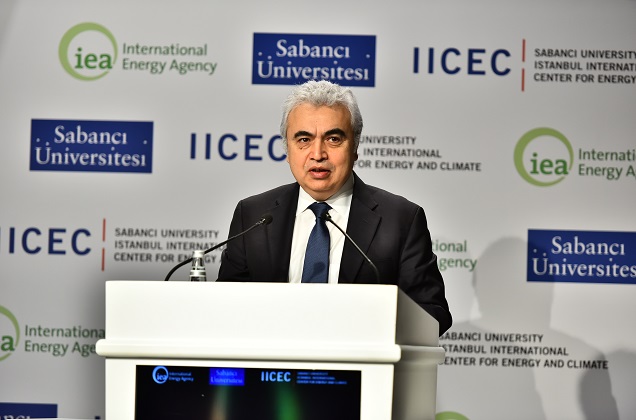 Executive Director of the International Energy Agency (IEA), and Honorary Chairman of Sabancı University Istanbul International Center for Energy and Climate Change (IICEC), Dr. Fatih Birol became the only person from Turkey to be included in “The Most Influential People of 2021” list of the TIME magazine, one of the most prestigious news and politics magazine in the world.

Sharing the same list as people such as Joe Biden, the US President, Frans Timmermans, the Vice-President of the European Commission, Elon Musk, CEO of Tesla, Donald Trump, former US president, Narendra Modi, Prime Minister of India, Dr. Birol has been the Executive Director of the IEA since 2015. Under his leadership, the IEA has moved to the forefront of global efforts to reach international climate goals while ensuring that the social and economic impacts of clean energy transitions are at the heart of policy-making and energy security is safeguarded. After taking office, Dr. Birol led the IEA in its first comprehensive modernization program since its creation in 1974. These efforts focused on “opening the doors” of the IEA to major emerging economies including Brazil, China, India and South Africa; making the IEA the global hub for clean energy transitions; and broadening the IEA’s energy security mandate beyond oil to also cover electricity, natural gas, renewables and the critical minerals needed in many of today’s clean energy technologies. With new governments joining the IEA, under his tenure the Agency’s share of global energy demand has risen from 40% to 75%.

Dr. Fatih Birol joined as a junior analyst in the mid-1990s and rose to the position of Chief Economist responsible for the IEA’s flagship World Energy Outlook. Dr. Birol has been named by Forbes as one of the most influential people in the world of energy and by the Financial Times as the Energy Personality of the Year. He chairs the World Economic Forum’s (Davos) Energy Advisory Board. He is the recipient of numerous state decorations, including the Japanese Emperor’s Order of the Rising Sun, the Order of the Polar Star from the King of Sweden and the highest Presidential decorations from Austria, Germany and Italy. Before the IEA, Dr. Birol worked at the Organization of the Petroleum Exporting Countries (OPEC) in Vienna for six years. He earned a BSc degree in power

Kerry: “Birol is an objective authority”

Former Secretary of State of the US and the US Special Presidential Envoy for Climate, Kerry spoke to TIME magazine about Fatih Birol. He said, “In a world where facts are assaulted, Fatih Birol combines the best of high-tech data, optimistic know-how and old-school rhetorical finesse. A trusted counselor to world leaders, he’s an objective authority on what it will take to slash carbon emissions and save our planet. His data-driven approach is like Moneyball for the clean-energy revolution.” Kerry continued, “Birol has transformed the International Energy Agency from a body mostly monitoring oil markets into a leading adviser to the world’s major economies across the full suite of energy technologies. Building on over 10 years of analysis, this year his IEA released its first comprehensive road map for reaching global net-zero emissions by 2050 and minimizing the risk of catastrophic climate impacts. Countries including India, China, Indonesia and Colombia have all asked him to chart road maps to speed climate action and reach net-zero emissions. When we get there, and if we get there in time, trust that Fatih Birol guided the course to turn words into reality."