‘Workplace Policy Development and Implementation Guide for Combating Domestic Violence Against Women at Municipalities’ prepared within the framework of Sabancı University Corporate Governance Forum’s Business Against Domestic Violence (BADV) project has been shared with the public. Talking about policy development steps and some successful examples, the Guide is expected to reinforce the multiplier effect of municipalities’ efforts towards gender equality. 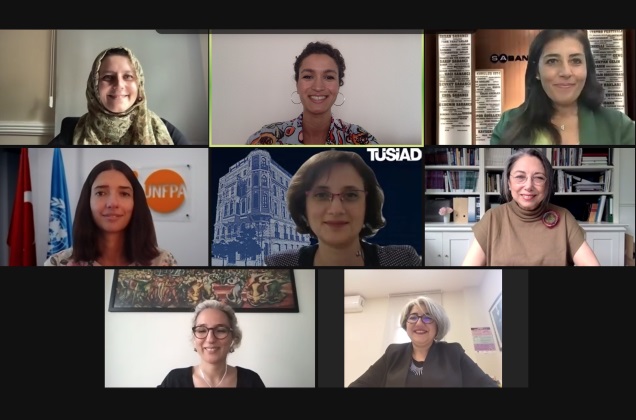 A new step has been taken in the ‘Business Against Domestic Violence (BADV) Project’ carried out by the Sabancı University Corporate Governance Forum of Turkey (CGFT) and supported by the Sabancı Foundation and the United Nations Population Fund (UNFPA) in collaboration with TÜSİAD, which aims to mobilize companies to act against violence suffered by working women by using the managerial and organizational capabilities of the business world.  ‘Workplace Policy Development and Implementation Guide for Combating Domestic Violence Against Women at Municipalities’, prepared within the framework of the project, has been published. Rümeysa Çamdereli, Director of Research of the YA DA Foundation, talked about the content of the guide during an online meeting moderated by Sevda Alkan, BADV Project Manager.

The guide includes steps, tools, methods and successful examples for municipalities, as employers that adopt gender equality in the workplace, for the development of policies and instructions that enable workplace and employees to be the least impacted by domestic violence against women. The guide also has some recommendations to municipalities that they can implement in their relations with subsidiary companies and other stakeholders to extend their combat against domestic violence. Within the framework of the BADV project, it is planned to do a pilot run of the guide in 3 voluntary municipalities in 2021.

Nevgül Bilsel Safkan from Sabancı Foundation, one of the stakeholders of the project said, “As Sabancı Foundation, we believe it is essential to ensure collaboration across sectors to generate durable solutions to a multi-dimensional problem such as gender inequality. In this context, we are proud of supporting the Business Against Domestic Violence project, which has been bringing together academia, civil society, international organizations and the business world since 2016.” Nevgül Bilsel Safkan continued:

“Companies that are trained and benefit from the guide within the framework of this project not only ensure gender equality among their employees but also contribute remarkably to social justice. It is very exciting to see this guide, proven to be very effective long ago, adapted to municipalities, which have an important role not just as a social services providers but also as employers. Talking about policy development steps and some successful examples, the guide is expected to reinforce the multiplier effect of municipalities’ efforts towards gender equality. We are very glad that the BADV project, which is a good example not only in Turkey but also in the rest of the world, has been applied in municipalities.”

Zeynep Başarankut Kan, Representative of the UNFPA to Turkey, said the following:

“We hope that with this guide municipalities will find more effective solutions to inequalities, which are the root causes of gender-based violence. We believe that with the recommendations in the guide, municipalities in their capacity as responsible public institutions and employers will assume ownership of the matter and re-design their institutional policies for women and with women, and implement their policies more effectively. Implementation of this guide will make municipalities safe workplaces for women working at risk of violence. The UNFPA has been working for a long time to increase the number of women-friendly cities and to enable the most vulnerable groups to access rights and local services. With the inclusion of municipalities in the BADV project, which is implemented in collaboration with Sabancı University, we aim to expand our local efforts and impact.”

THE NUMBER OF PARTICIPATING COMPANIES REACHES 90

Ebru Dicle, Secretary General of TÜSİAD reminded us that TÜSİAD has provided support for the BADV project since 201, and continued:

“We are working so that more and more companies become involved. When we set off, our aim was to generate an applicable and reproducible model, and act against violence against women with all our institutional capacity. The number of participating companies, which has reached 90, shows the private sector’s commitment and ambition. The participating companies have carried out training, applications and awareness-raising activities not only for their own work environment but also for that of the companies included in their supply chains and even their clients.  The fact that the impact area of the project keeps growing is promising in terms of eliminating this vital problem.

The “Business Against Domestic Violence” project is one of the concrete and effective examples of academia-civil society-private sector cooperation. Participation of municipalities in this cooperation will more than reinforce the existing efforts. Gender equality is a concern not only for women but also the whole society. We have to continue to work in collaboration and solidarity with each other to build a country where women live safely.”

After the guide was introduced, a panel entitled “The importance of local administrations as employers in the fight violence against women” was held. Moderated by Melsa Ararat, Director of Sabancı University Corporate Governance Forum, the panel hosted Zelal Yalçın, Coordinator of the Social Policies Center of Istanbul Metropolitan Municipality’s Istanbul Planning Agency and Özgün Akduran, member of Istanbul University Faculty of Political Sciences.

Emphasizing that women were appointed to deputy secretary general positions at the Istanbul Metropolitan Municipality for the first time in 2019 following the local elections, Zelal Yalçın continued, “Local administrations create a multiplier effect in implementing equality policies. They spread equality street by street, neighborhood by neighborhood, district by district. Therefore, the implementation of the guide offers a very important, practical, applicable, concrete and sustainable program to expand and make permanent the culture of equality. The guide is applicable to all the local administrations.”

Özgün Akduran underlined that the guide was one of the most original contributions thanks to its proposal for a risk assessment regarding municipality employees’ incurring or committing violence. Akduran said that if the training recommended by the guide was not limited to managers and other employees who request it, and covered all the municipality staff, then the project would be more sustainable. He also touched upon the multiplier effect of the guide. He said that when employees, especially those in citizen-facing roles, gained awareness of the framework, the dimensions of violence against women, and how to prevent it through risk assessment, questionnaires and training, they would not only notice various forms of violence that they and their colleagues could be subject to, and take action, but also stay aware and vigilant about any similar experience that their fellow citizens could have. For example, staff members in charge of distributing social benefits, health staff working in municipal clinics, and social workers and trainers in vocational courses like ISMEK should be able to notice that the women they are in contact with have been subject to violence and guide them to the right place in such a case.

You can reach “Workplace Policy Development and Implementation Guide for Combating Domestic Violence Against Women at Municipalities” via this link.

Melsa Ararat: “How do we fix the career pipeline...