Sabancı University’s 20th undergraduate and 23rd graduate classes’ commencement ceremony was held on the campus in Tuzla. During her address to the graduates, Güler Sabancı, the Founding Chair of the Board of Trustees of Sabancı University, highlighted that the climate crisis is too urgent to be postponed, and said, “Both in our country and in the world, we are experiencing significant increases in natural disasters such as floods, fires and droughts due to climate change. The world needs to come up with solutions to this problem by working together”. 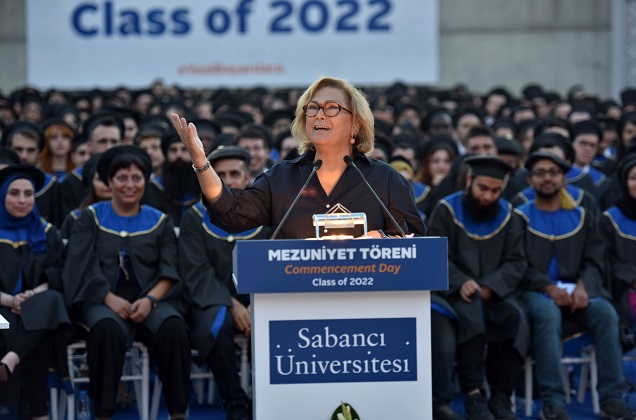 Speaking at the ceremony, Güler Sabancı, the Founding Chair of the Board of Trustees of Sabancı University, reminded the advice of Uğur Şahin and Özlem Türeci to young people, and said: “Last year, at our Commencement Ceremony, our distinguished scientists Özlem Türeci and Uğur Şahin addressed our graduates. Ms. Özlem Türeci said, "The important thing is not to choose the easy option, but to choose a task or job that has a purpose". I also attach great importance to this.

Mr. Uğur Şahin, on the other hand, highlighted the importance of science in the world, adding that the pandemic once again showed us this fact, and that the way to progress in science is through curiosity. He also emphasized that curiosity and having a purpose are very important. You are graduating at a time when the world is going through a difficult period. You are at the beginning of a new period, a new normal and a new path. In this new normal, I believe that you will be successful by working with courage, perseverance, and most importantly, working hard”. 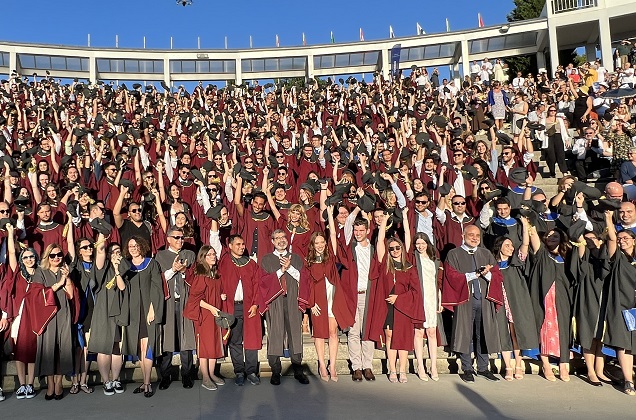 Speaking about the climate emergency in her speech, Güler Sabancı continued as follows: “It is now accepted that the 1.5-degree warming target set in the Paris Agreement will be exceeded. Both in our country and in the world, we are experiencing significant increases in natural disasters such as floods, fires and droughts due to climate change. The world needs to come up with solutions to this problem by working together”.

“You should have a useful purpose to serve humanity”

Giving advice to young graduates, Güler Sabancı said, “You have the skills needed to easily achieve the successes you aim for in your career. Each of you can contribute to the solution of all problems in your environment, in your families, in your neighborhood and be a part of the solution. Research shows that for long-term happiness in life, it is very important to have a purpose that will serve the society and humanity. Thanks to the education you received and the knowledge-based studies you carried out at our university, and the approach of creating and developing together, you have solution-oriented competencies that involve the effective use of technology. These competencies will give you great advantages”.

Güler Sabancı also emphasized that Sabancı University is among the most respected universities in the world, despite being a very young university. She said, “This was the purpose of our university at the establishment stage. We have reached this point with great effort, endless faith and hard work. Behind this success lies the dream and aim of bringing a world university to Turkey. On this occasion, I also commemorate our Honorary Chair, the late Sakıp Sabancı, whom we always feel by our side, with great love and respect". 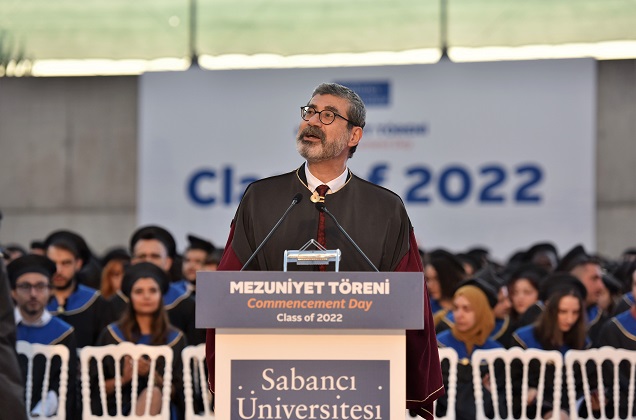 In his speech at the commencement ceremony, Yusuf Leblebici, President of Sabancı University, summarized the progress and achievements of Sabancı University in the past few years. Leblebici said: “The success rankings of our new students who join our university continue to rise every year. According to the university exam results, we managed to double the number of students from the top 1000 within 3 years. Today, we award undergraduate diplomas to 226 students in Computer Science and Engineering and 240 students in Industrial Engineering. In the field of computer science, we will increase this number to over 450 in the next two years. I am proud to emphasize that we are the only university in Turkey that can achieve this without applying a quota limit in any of our undergraduate programs”.

Leblebici stated that 97 percent of Sabancı University graduates start their careers in the sectors they prefer or continue their graduate studies in their country of choice within the first year of receiving their diplomas, and noted that they aim to become one of the most recognized and appreciated research universities not only in Turkey but also in the world. Prof. Dr. Yusuf Leblebici said, “We conduct pioneering and prominent research in our faculties and centers, and we receive strong project support from domestic and international sources for these studies. I would like to inform you that as a result of our achievements we are one of the first 3 foundation universities to be included in the list of Research Universities approved by the Council of Higher Education (YÖK) in the past months”.

Stating that Sabancı University Executive Development Unit, EDU, maintains its steady rise in the field of custom programs in the Financial Times rankings, Leblebici concluded by saying, “EDU, which first entered the list at the 78th place in 2018, rapidly rose in the rankings, and became 42nd among the world universities this year. We are very proud to be the only university in Turkey to achieve this”. 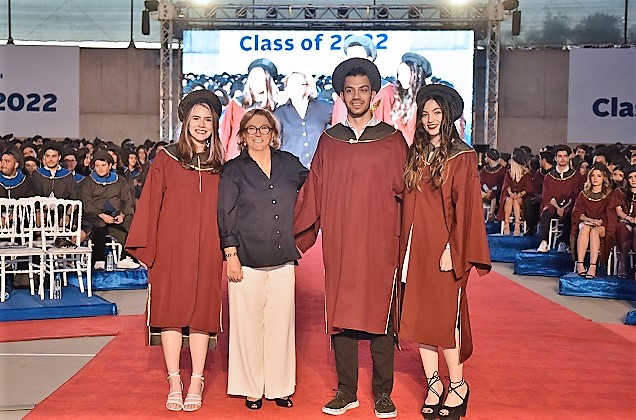