Being the first international award program in Turkey in the field of social sciences, the Sakıp Sabancı International Research Awards were given for the 17th time this year.

Endowed in the will of the late Sakıp Sabancı, the Honorary Chairperson of Sabancı University, the Sakıp Sabancı International Research Awards continue to reward scientists in the field of social sciences. The 2022 theme of the Sakıp Sabancı International Research Awards was “The Future of Globalization: Return of the State?”. Professor Pippa Norris, who has taught at Harvard for three decades as the Paul F. McGuire Lecturer in Comparative Politics, has been found deserving of the Jury Prize. The author of 50 books about government systems, electoral integrity, and democracy, and the scientist with the second highest number of citations in the field of social sciences according to Google Scholar, Professor Norris is also the Founding Director of the Electoral Integrity Project implemented by Harvard University and the University of Sydney.

During her speech in the online award ceremony, Güler Sabancı, the Founding Chair of Sabancı University Board of Trustees, said, “Organized with the valuable contributions of the Sakıp Sabancı Family and hosted by Sabancı University, the Sakıp Sabancı International Research Awards are highly valuable for us in that they are the first and only international award program in Turkey in the field of social sciences”. Güler Sabancı continued as follows:  “Around this time last year, we were talking about coping with the pandemic, the common problem of humanity, all together. Today, an international conflict has been added to the ongoing global problem. The war taking place a little beyond our borders is worrying for us all. In this period when peace is under threat in the whole world, we need the guidance of social sciences more than ever.” 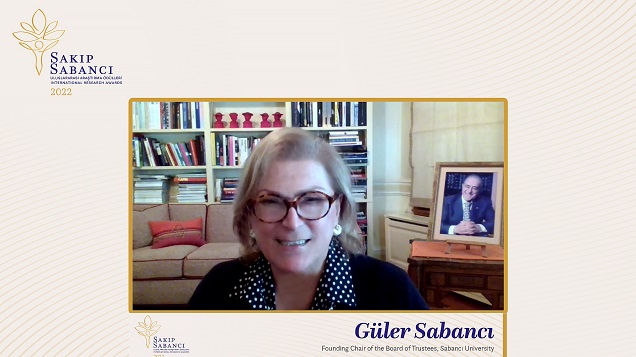 Highlighting that, empowered by social sciences, the Sakıp Sabancı International Research Awards achieves an important mission by helping to understand today and shed light on tomorrow, covering a different theme every year, Güler Sabancı said the number of applicants’ countries increased every year, covering a large geographical zone from the US to India, proving the strong international characteristic of the award program. Güler Sabancı: “This year we have received applications from various countries such as Jamaica, Mexico, North Macedonia and Hungary, which demonstrates the inclusivity of our award program. There is no doubt that the theme of this year, which is “The Future of Globalization: Return of the State?”, is very important for us all, considering the circumstances we are in.”

THEME OF NEXT YEAR’S AWARD: “THE 100TH ANNIVERSARY OF THE REPUBLIC OF TURKEY: REPUBLICANISM IN THEORY AND PRACTICE”

Pointing out that Sabancı University would continue to support science and researchers not only in the field of social sciences but also in management sciences, engineering and natural sciences, Güler Sabancı added, “We will continue to break ground like our Altunizade Digital Campus that we established last year. Our University’s education structure that eliminates the walls between disciplines makes considerable contributions to our country raising successful entrepreneurs. We are glad that we can reflect our philosophy of creating and developing together not only in science but also in many other fields including education, economics, and technology”.

“As you know, we will celebrate the 100th anniversary of our Republic, which we established and developed together under the leadership of Mustafa Kemal Atatürk. With this in mind, our Award Committee, which leads the process, set the theme of next year as “The 100th Anniversary of the Republic of Turkey: Republicanism in Theory and Practice”. I am confident that we will reward stimulating research next year as well”.

PIPPA NORRIS: “GLOBALIZATION SHOULD NOT BE CONFUSED SIMPLY WITH OTHER CONCEPTS” 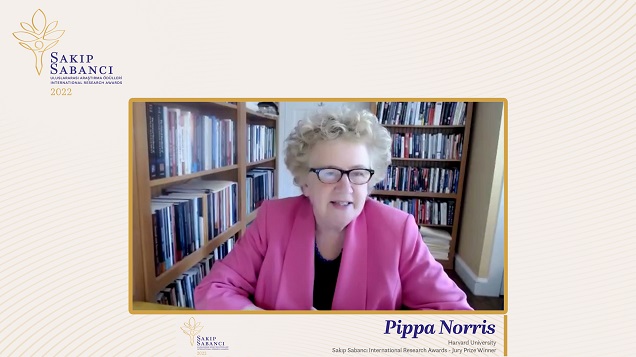 During the speech she delivered at the online award ceremony, Professor Pippa Norris, winner of the Jury Prize at the 2022 International Research Awards, said, “I am truly honored and delighted to be able to participate in this year’s Sakıp Sabancı International Research Awards, one of the foremost world prizes in terms of recognizing and encouraging excellence in the social sciences.”.

In her speech, Norris, referring to the theme of the 2022 awards, said, “Globalization is a global phenomenon and it is complex. It should not be confused simply with Westernization, nor with Americanization, an older concept, as the word is sometimes called. Many of those who are leading global countries are in fact those in Europe, like the Netherlands, like Belgium, like Singapore in Asia, highly-integrated with world economies, as the United States is as well. Turkey currently ranks about 58th out of 208 independent states in the 2021 KOF globalization index. And many values are changing in countries around the world.”

Stating that there are no simple answers to the question about whether signs suggest that the early twenty-first century has experienced a retreat back towards the older forces of nationalism, Pippa Norris continued as follows:

“Developments are clearly moving into a world, which is even more interdependent than it has been in the past. Enduring ties between countries exist and can be strengthened. Let me just give you three events which illustrate these broad changes. Firstly, clearly the Covid pandemic. Countries have seen how this particular problem spreads from one to another around the world at different phases. And It is no respecter of artificial borders or lines drawn on map. Secondly, we can see the revival of international conflict. There are many reasons why we all hoped and often assumed, that never again would there be a major war on the European continent. But Russia’s invasion, a major nuclear power invading its neighboring state with tanks and missiles at the whim of its leader, the images we have all seen, flattened civilian homes and major casualties, hospitals in the rubble, train stations being bombed, the worst European conflict arguably in terms of the numbers of deaths and certainly destructions since 1945, highlights that Europe was complacent.  Finally, what else is challenging the idea that globalization has departed, clearly, the challenges of global warming and climate change. The Paris agreement took the world one step further towards some united response. No country, not even the richest states in the world, can avoid or has been immune from the consequences, whether it is floods in Germany, whether it is hurricanes and typhoons in the United States, whether it is bush wildfires and floods in Australia. Cooperation and collaboration is even more essential in the 21st century than it has been in the past. In my heart, I hope that cooperation is victorious in this battle. I hope we continue to understand the issues of globalization and the researches which is being sponsored and supported in this award program really advances our understanding.”

APPLICATIONS EVALUATED BY AN INTERNATIONAL AND INDEPENDENT JURY

The award program is carried out by Sabancı University, under the leadership of Sabancı University Faculty of Arts and Social Sciences and the Istanbul Policy Center, and essays submitted are evaluated by an independent and international jury. In the context of the award program, a different theme is determined every year from across all the disciplines of social sciences ranging from economics to politics, history, and psychology. This year, the international award program has received applications from 12 countries ranging from the US, to India, Jamaica, and Macedonia.

The three award-winning essays of this year are listed below:

Economic Policy and the Role of Government in a Globalized World

The Reversal of Electoral Fortunes: Anti-Elitist Attitudes in the Age of Populism and Globalization

Bringing the State Back In: Populism, Economic Nationalism and the Instrumentalization of Globalization in Europe