Lord Nicholas Stern: “Zero-carbon can be a powerful growth story"

We did a special interview with Lord Nicholas Stern. 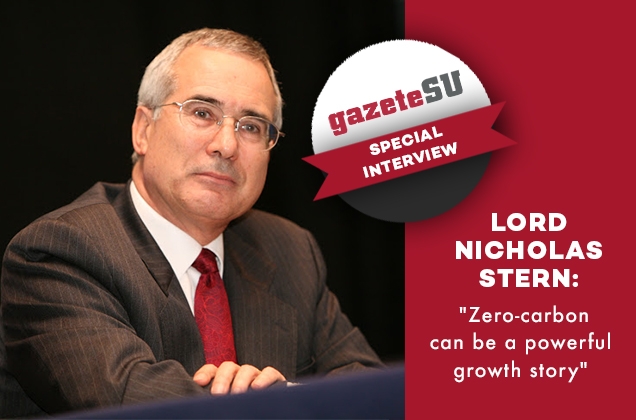 He was knighted for services to economics in 2004, made a cross-bench life peer as Baron Stern of Brentford in 2007, and appointed Companion of Honour for services to economics, international relations and tackling climate change in 2017. He has published more than 15 books and 100 articles and his most recent book is “Why are We Waiting? The Logic, Urgency and Promise of Tackling Climate Change”.

Here is our special interview with Lord Nicholas Stern.

It is believed that developing countries are not so eager to commit to decreasing their carbon emissions due to their fear of limiting their economic growth. Do you agree with that? If so, how can they be convinced to commit more? How about developed economies? Do they have similar incentives?

We are increasingly finding that the drive to low- or zero-carbon can be a powerful growth story.  It is full of discovery, innovation, investment, and growth.  Further, that growth can be rich with job opportunities.  We can see that the costs of electricity and other activities through clean low-carbon technologies are already lower than for fossil fuels.  The technologies of the 19th and 20th century are not only dirtier than modern technologies, but they are also more expensive than modern low-carbon technologies.  Thus for both developing and developed countries there is no horserace between environmental and climate responsibilities on the one hand, and growth on the other.  And we must recognise that an attempt to stay with the old dirty technologies will lead to stranded assets, as the world moves in a much cleaner low-carbon direction.  Stranded assets mean stranded jobs.

Turkey and four large oil exporting nations are among eight countries that have not yet ratified the 2015 Paris climate agreement. The US, which is still on the UN list of the 187 that have ratified, began the procedure to withdraw from the accord in 2019 and will leave on 4 November this year. What do you think about these developments? Is it a major obstacle to the efforts shown by countries to stop climate change?

The vast majority of countries have ratified the 2015 Paris agreement.  The US planned withdrawal would take place the day after the next Presidential election.  One way or another, I think the US would re-join under the next President, whether the changeover takes place in early 2021 or later.   Increasingly, the oil exporting countries are recognising that the future is low carbon and are preparing for it.  In fact, the commitment to the Paris agreement has been remarkably robust under the pressures of difficult times.  More and more the business world has recognised where economies and technologies have to go, and are leading the action.  Often they are ahead of governments.  Thus, I think the momentum for the Paris agreement will strengthen, even though there may be some ups and downs.

Can you comment on your view about the economic impact of COVID-19 on the world economy? It has started to change many things in our life. In the face of this pandemic, do you now have different perspectives about climate change?

The health implications of COVID are immense.  So, too, are the economic.  The falls in output we are seeing are extraordinary in economic history.  There is a serious risk of a global depression.  Countries around the world must protect employment in the short run (the rescue period), and then invest in a strong and sustainable recovery.  We are seeing that activities and investments that are sustainable can give faster employment, be more labour-intensive, and carry stronger economic multipliers than standard traditional activities.  Thus, recovery and the transformational growth we need can be driven by and interwoven with climate action.

Are we in a position to question capitalism because of climate change and natural disasters?

I do not think that climate change and natural disasters undermine the case for capitalism.  The history of centrally-planned economies in the last century was one of deep damage to the environment.  On the other hand, capitalism and market-based economies function best when the price system reflects costs.  There are also many aspects of these systems that require strategic planning including, for example, city design and national parks and protected areas.  Thus within a capitalist system, we must have active policies on the environment, climate change and biodiversity.  And there are many important relevant market failures, for example in capital markets, R&D, and networks that require policy action. Since many of the issues are global, policy requires collaboration across nations.

How will the COVID-19 epidemic affect general capitalism’s ideal? Do you think governments would play a major role in economic mechanisms in the next decade? Or will companies take more social responsibility in pandemics or climate change?

The epidemic does require strong government action.  In the immediate rescue phase it requires employment protection.  Active employment policy will  be necessary for several years in most countries.  It will also require government involvement in the economy in the management of the many loans that have been extended from government.  Thus we will see a stronger role for the state in most countries in the coming years than we saw earlier.  That will be true of health, employment, investment, training, finance and so on.  We are seeing companies taking greater responsibilities for the health of their employees, at least for the good companies.  I think that these are the companies that will do better in the recovery.

For the post-pandemic period, do you have any recommendations for economic recovery in developing countries like Turkey? What action plans do you think Turkey can enact?

Developing countries and emerging market countries have been hit particularly hard by the COVID pandemic.  Their health systems are weaker and so, too, are their systems for social security.  On top of this they face reduced remittances, capital flight and falling commodity prices.  For many, including Turkey, they face steep falls in tourism.  This will be a very difficult period.  They should press rich countries to expand their economies quickly and work for debt reductions and debt relief.  At the same time, they should try to put in place clear recovery plans, so that investors can see directions for the future.  In many cases there would be great potential for employing labour that would otherwise be unused in natural capital programmes, including for land and forests.  As well as the great benefits in their own right, this could increase attractions for tourism.  It is also important to think through difficulties in supply chains for their exports to richer countries, to try to build confidence in those countries for sourcing inputs.  However, there is no doubt that this will be a difficult period.  In this context, international relations will be very important and it will be crucial to work closely with the European Union and other countries.