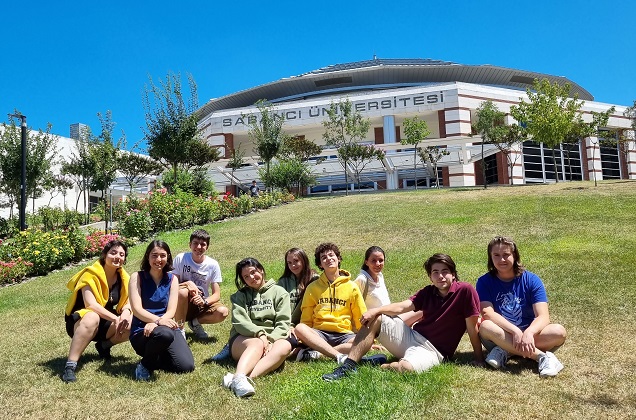 The Asian Science Camp, which since 2007has aimed to create an environment for scientific discussion by bringing gifted and talented young people between the ages of 16-19 who are interested in science together with distinguished researchers and Nobel prize-winning scientists, will be held on 24-30 July 2022, in Daejeon, South Korea.

This year's Nobel laureate speakers of the Camp, where 8 young people from Turkey are hosted at the Sabancı University Tuzla campus and participate online, are Tim Hunt, who won the Nobel prize in Physiology/Medicine in 2001, Randy Schekman, who received the same prize in 2013, and Stefan Hell, who received the Nobel Prize in Chemistry in 2014.

“An invaluable and unforgettable experience”

Zeynep Gülse Aydın (Sainte Pulchérie High School - ISTANBUL), one of the camp participants, noted that they have learned a lot from different fields at the Asian Science Camp. She said, “There are many subjects from physics and mathematics to historical narratives and current life. Since I want to work in the scientific field in the future, I can say that it has benefited me a lot”. She is also very pleased to meet new friends thanks to the camp. She added “I never thought we would get along so well. Everyone is so different. But we all found very nice synergies. We help each other. We answer questions”.

Eylül Ustaoğlu (Üsküdar American High School - ISTANBUL) thinks that one of the best aspects of the program is to experience Sabancı University. He said, “Thanks to this camp, I had the opportunity to visit Sabancı's campus for the first time. I think it is very nice to stay in the dormitory and benefit from the facilities of the university. Apart from the Asian Science Camp, Sabancı University's activities such as visiting Co-Space, SUNUM building and laboratories are also very well thought out. We also meet with Sabancı University professors in our fields of interest. Sabancı is accomplishing a great thing by bringing this program to Turkey. It is difficult for students from Turkey to communicate with Nobel laureates. The aim of all of us is to be useful to our country. It is important to increase the access of children in our country to education and academia. In this sense, it is a very valuable and unforgettable experience for me”.

Another participant, Onur Yiğit Taş (ISTEK Kemal Atatürk Anatolian High School - ISTANBUL), who shares the same opinion, said, “Physical participation in the Asian Science Camp could also be nice, but I think this is good, too. We can find the same opportunities at Sabancı University”.

Since the Asian Science Camp is held in South Korea, the lesson hours are scheduled accordingly. Ömer Eren Koçyiğit (Hekimoğlu High School - KONYA) said that this created a bit of a jetlag effect on them. He said, “It is a little difficult to get up at 3 am and sleep during the day, but we got used to it. The course content is very rich. So far, we have taken lessons from 3 Nobel laureate researchers. The topics are also very interesting. We have the opportunity to take courses in many different fields such as molecular biology, nanophysics, and theoretical physics”.

Eren Umay (Robert College - ISTANBUL) pointed out that the camp has accomplished an important job in terms of the unconditional sharing of information. He said, “I believe that information should be in the public domain. The program ensures that information is freely available to students. Therefore, the goal of the program is quite nice and important. Although the content of the program is sometimes below my expectations, it is quite beautiful. It is also very nice to be able to benefit from Sabancı University's facilities and make new friends”.

Bora Menderes (Nazilli Science High School - AYDIN) says, "The camp is nice in general," and adds, "The lectures given by European scientists were particularly good. I am very pleased".

Alara Sayar (Çakır High School – BURSA) said, “Whatever you are interested in, there are many different topics that you can enjoy listening about. It is a very good environment”.

Senem Dila Yılmaz (FMV Işık High School – İSTANBUL) thinks that there are some aspects of the program that can be improved. She said, “The program is good, but there are also lessons that we have covered before. There are also other lessons that I heard for the first time. I plan to write popular science books for children in the future. I want to establish a museum. As a child, I would like to know what other children are doing. I think there are aspects that need improvement. It's great to be at Sabancı University, though”.

They brought the Best Poster Award to Turkey

Sabancı University Ph.D. Student Ebru Çetin is the Turkey Team Leader at the Asian Science Camp, where various events are organized in addition to scientific classes. In the poster competition, which is one of these events, the Turkish team received the best poster award, crowning their experience in the Asian Science Camp. We congratulate them on their success.