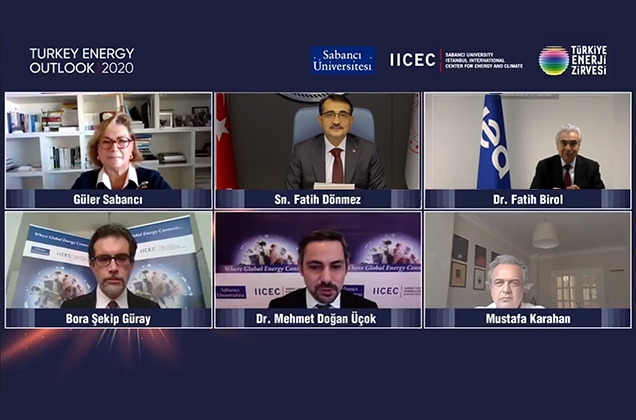 IICEC’s Turkey Energy Outlook, completed with a detailed and comprehensive modeling and scenario analysis approach that is developed by IICEC, not only serves as a pioneering study in Turkey and an exemplary approach for developing energy economies but also represents the future perspective of the Turkish energy sector. This important report, with its comprehensive scope and content, offers ten concrete energy policy recommendations, which provide guidance for policy makers, investors, the business world and academic studies within the Public-Industry-Academy success triangle.

Sabancı University Board of Trustees Founding Chairperson Güler Sabanci in her opening speech at the Turkey Energy Outlook: Turkey Energy Summit Special Launch said that “The pandemic has created an environment of uncertainty, but with the power of science, the light at the end of the tunnel is in sight, and that today everyone had gathered for an important report prepared in the light of science.” Güler Sabancı stated that Sabancı University Istanbul International Center for Energy and Climate (IICEC) has continued to grow under University’s umbrella since its establishment in 2010, and stated that, the “Turkey Energy Outlook project is highly meaningful in the twentieth year of our university and the tenth year of IICEC”.

Güler Sabancı: "THIS REPORT IS AN INDEPENDENT AND OBJECTIVE UNIVERSITY PRODUCT AND A FIRST AND A PIONEER IN TURKEY.”

Güler Sabancı continued her speech as follows: “We have completed the pioneering and exemplary work that I dreamed of 10 years ago when we were first establishing the IICEC. The governance model we created at the IICEC is also a first and an exemplary model. The key to success in developed countries are governance models that highlight participation and synergy, bring all serious stakeholders together and enable them to towards common goals and a better future together while independent, qualified research institutions create a solid basis for this. I define this as the ‘Success Triangle’. IICEC is a solid example of this Success Triangle in Turkey, that serves as a melting-pot for Public-Industry-Academy;  encompassing the policy-making and regulating the function of the public, the private sector as the investor and market actor in the industry, and academia with its research abilities all working, producing and creating value together.

Emphasizing that they came together on this day  for the Turkey Energy Outlook study developed within this success triangle, Güler Sabancı continued as follows:

“I know that IICEC carried out this work through a cooperative process via meetings and exchanges with important stakeholders from both the public and private sectors and industry. Therefore this project stands out not only with its academic quality but also serves as a guide book for the sector. This work, as you know, is a first of its kind in Turkey, a pioneer. It will be an example for developing country economies with both its methodology and quality. It was Dr. Fatih Birol who first proposed this idea and has followed the project thoroughly from its initiation; I thank him. We have 5 main goals: A more secure, efficient, competitive, technology-oriented and more sustainable future for energy. I think that this independent and objective University study, will be read and followed with interest in the sector and will be an important guide with its long-term perspective.

The energy sector of Turkey has been an example to other sectors for many years in attracting foreign investment. I believe that this report will function as a very useful reference resource in enhancing the investment attraction of our energy sector and attracting modern, innovative energy and technology investments to our country”.

FATIH BIROL: TEO IS A PIONEER STUDY FOR DEVELOPING COUNTRIES

International Energy Agency (IEA) Executive Director Dr. Fatih Birol thanked everyone involved in the preparation of the report and said that “Similar studies have  been carried out in various countries, and I thought it would be very beneficial to conduct such a study in Turkey as well. IICEC was able to bring this idea to life. This study presents the perspective of the period until 2040 with a holistic approach covering all energy sectors, energy sources and technologies. I believe that the study addresses opportunities in the energy sector for a more secure, more efficient, competitive, technology-focused and sustainable future and is also a pioneering work for developing countries.

Stating that as the IEA, they examine all the data in the world every day, Dr. Fatih Birol said that the global energy sector has gone through an unprecedented year and has experienced its biggest shock ever. Dr. Birol also stated that during this process they were also happily surprised with two developments from Turkey. "First of all, electricity consumption in Turkey has come to pre-pandemic levels of 2019 and even surpassed this. The second is the latest natural gas discovery” he said.

Bora Şekip Güray, IICEC Director of Research, stated that they have evaluated all energy sectors, resources and technologies in detail and with a long-term perspective in this study and they carried out with a comprehensive and holistic energy model and scenario analysis. As a concrete output, the study presented 10 suggestions that both support the energy policy goals, and at the same time promote new initiatives, which will result in a more secure, efficient, competitive’ technology-focused and sustainable energy future. Güray stated that this study, which is a pioneer in developing countries in terms of its content and methodology, is a guiding study for the stakeholders of the sector, which also sheds light on current developments such as the effects of the Covid-19 pandemic and the latest natural gas discovery.

Bora Şekip Güray, summarized the 10 suggestions in the report within the framework of the TEO findings, as follows:

MINISTER OF ENERGY AND NATURAL RESOURCES FATİH DÖNMEZ: "THIS PIONEER REPORT IS AN IMPORTANT SOURCE THAT WE CAN USE TO SHAPE OUR IDEAS"

The Minister of Energy and Natural Resources Fatih Dönmez, who attended the Turkey Energy Outlook launch meeting, said that: “After the pandemic, the world economies will be accelerating more to compensate for their losses. This situation will revive the falling energy demand, especially in Europe and the USA. This will provide new windows of opportunity for energy investments. But from this point onwards, the world cannot travel down a new road with traditional ways. As the report indicates, a future with renewable energy and energy efficiency at the center awaits us”.  Dönmez, emphasizing the role of energy technology also stated that Turkey wants to be an influential player in the region and that domestic technology should play a major role in this regard.

The Minister of Energy and Natural Resources Fatih Dönmez, said: “Up until now, we had hoped that others would also carry out energy studies and we would also benefit from them. Sabancı University-IICEC has fulfilled our wish. This report, a first of its kind in Turkey, prepared by the Sabancı University-IICEC is a highly significant resource in shaping our ideas. We benefit not only from our intellect but also from the intellect of universities and research centers. I extend my thanks to all who contributed to this study".