The Story of 20 Years by Zeynep Bahar Çelik

Going in alphabetical order, this week's interviewee for "The Story of 20 Years" is Zeynep Bahar Çelik. 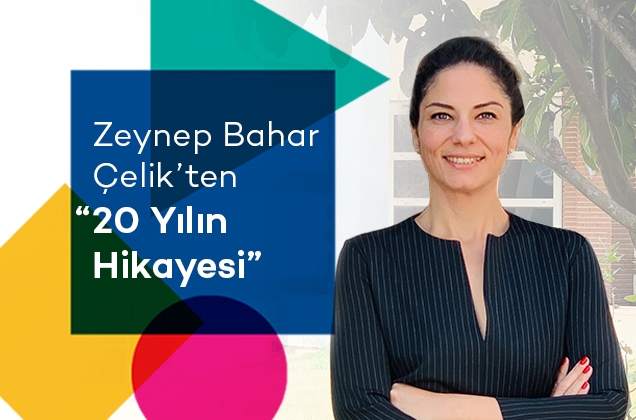 Zeynep Bahar Çelik has been a member of the Sabancı University family for 21 years. She is one of the first 249 undergraduate students of 1999, when the university opened its doors. Having graduated from the Social and Political Sciences (SPS) Program of the Faculty of Arts and Social Sciences (FASS) in 2003, Zeynep Bahar Çelik is one of the first graduates of the university. After receiving her bachelor's degree, she immediately started working in Civic Involvement Projects (CIP) at Sabancı University. She completed her master's studies in Communication Strategies at Galatasaray University in 2007. Zeynep Bahar Çelik has been working as the CIP Manager of the university since 2009. She also teaches CIP 101, one of the compulsory courses.

Zeynep Bahar Çelik’s answers to our four questions are below.

Z.B.Ç: I first visited Sabancı University in September 1999. Like every high school senior, I dreamed all year about what kind of university I would go to and what I would experience. Sabancı University was opening for the first time that year, so there was no information I had heard about it or a picture I had seen, everything was left to my imagination. I remember my first day at school like it was yesterday. It was a slightly windy but warm autumn day. As soon as I entered the campus, I was shocked, what I saw was a finished building or two, a lot of construction, and a road that had not even been completed :) I was a little upset, but when we parked in the parking lot of the current School of Languages and started walking to the Rector's building, two people ran from the building and came towards us with their arms open (yes, their arms were really open as if they were to hug us). “Welcome, you have no idea how we were looking forward to seeing you,” they said with a warm smile on their faces. At that moment, the negative feeling that had just emerged in me completely disappeared. Maybe it was not as I had imagined it, but I felt that I had begun a very colorful and different adventure which I was expected to be a part of.

Z.B.Ç: I was actually a child who grew up with self-confidence thanks to the education I received before university and what my family taught to me, but with the educational approach adopted by Sabancı University, my self-confidence was enhanced and evolved into a different dimension. As a student who studied SPS here, I and my friends had a hard time with many of the common and mandatory university courses we took in the first two years. However, even if we had difficulties, we managed to succeed. Yes, I was into social sciences, but I saw that I could replicate DNA or calculate the entropy change if I wanted to. In addition, over the past 20 years, I have experienced countless examples of how I can use things that do not seem to be related with my field by internalizing what I do, how I can see things from a different perspective, and how it enriches my point of view. That is why I would say that one of the biggest differences between Zeynep 20 years ago and Zeynep now is the understanding that anyone can learn anything and self-confidence that it brings. What makes this possible is the unique education that Sabancı University offers to every student who has chosen this place.

Z.B.Ç: I believe that Sabancı University is an institution that has always been able to look beyond the obvious and into the future from the moment it was conceived as an idea. The many innovations and leading roles it brings to the education system are an indication of this. I sincerely believe that this will not change in 20 years. As a university that instilled in its students to be the creator of change and enjoy it without fear, 20 years later, it will be a university that has its eye on change, researches, produces, and creates.

20 years later, the number of people whose path has crossed with Sabancı University will also have increased significantly compared to today. I believe that one of the most important elements that make up and add value to a university is its graduates. I believe that the difference, contributions, and impacts of its graduates thanks to the education they receive, which will increase and spread around the world, will be felt very much at the university.

Z.B.Ç: One of the things that make Sabancı University stand out is that Civic Involvement Projects (CIP) is among the courses that all students are required to take. Sabancı University is an institution that wants everyone who graduates from here to be not only scientifically qualified in their field of study, but also responsible towards society and acquainted with the concept of active citizenship. Of course, I took this course in my first year as well.

1999 was also the year of the Izmit earthquake, and it was unthinkable as young people of that time not to reach out to those in need there when the school had just opened. This had a big impact on both the formation and the beginning of the CIP course. After taking the course, I continued to be part of CIP until I graduated, first as a supervisor and then as a consultant. I would say that most of my university life was spent in social responsibility projects and CIP. Most of the friendships that I built there turned out to be life-long friendships. And, of course, most importantly, my experience in CIP defined my career path after graduation. If I had not studied at Sabancı University, I would have continued my life maybe in a different field, maybe in a similar field, but with a very different route. I can say that I took the first steps of the path that led to my job 20 years ago at Sabancı University, where I can remind young university students of their social responsibilities, show them that each of them can make a small difference by going on the field, work with great pleasure.