The 10th Anniversary of the IPC-Stiftung Mercator Initiative was celebrated

The 10th Anniversary of the Istanbul Policy Center-Sabancı University-Stiftung Mercator Initiative was celebrated with a panel. Relations between Turkey and Germany were evaluated in the panel entitled “Turkey-EU/Germany Relations: Then, Now and Future”. At the event, it was expressed that Turkey would be together with the EU in the long term. 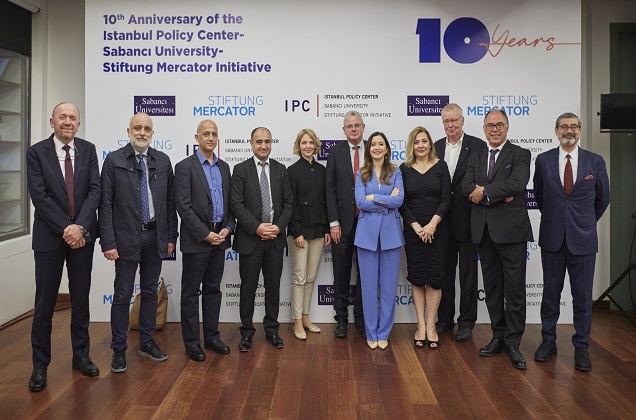 The 10th Anniversary of the Istanbul Policy Center-Sabancı University-Stiftung Mercator Initiative, which aims to develop academic, political and social ties between Turkey and Germany, was celebrated with an event held at the Sakıp Sabancı Museum. Through the Mercator–IPC Research Fellowship Program realized as part of this initiative, researchers carry out academic studies in a wide range of subjects from climate change to social cohesion of refugees, from cultural policies to gender.

In his speech at the panel, Fuat Keyman reminded participants that 9 May is both Europe Day and Russia Victory Day and emphasized that Russia's attempt to invade Ukraine has led to important political changes and a paradigm shift regarding international relations and Europe. Pointing out that the war created a kind of momentum for the revival of the relations and partnerships between the transatlantic alliance and the two sides of the Atlantic, Keyman also drew attention to the challenges brought by this situation. Among these challenges, Keyman listed growing concerns over isolationism in the United States and the capacity and willingness of Europe and NATO to maintain existing solidarity should the war continue. In his evaluation, Keyman pointed to a revival process in which the idea of ​​Europe continues, and he stated that the war could trigger a move to a systemic transition process and uncertainty that can be described as the end of the liberal order.

The first speaker of the panel, Mercator-IPC Advisory Council Member Ruprecht Polenz, said that the first thing he would want to do when looking back on Turkey and EU relations would be to press the reset button. Recalling the existence of a very hopeful atmosphere when the Turkey-EU negotiations started in 2005, Polenz evaluated Turkey's not being accepted for membership in advance and the discussion of a privileged partnership status as mistakes made during the negotiations. Stating that international relations are now largely shaped through civil society connections, Polenz said that what needs to be done in this direction is more inclusive and broad-based diplomacy and that civil society relations should be included more in international processes. Stating that this integration will make a considerable contribution to Turkey-EU relations, Polenz stated that he believes Turkey will be with the EU in the long run no matter what. 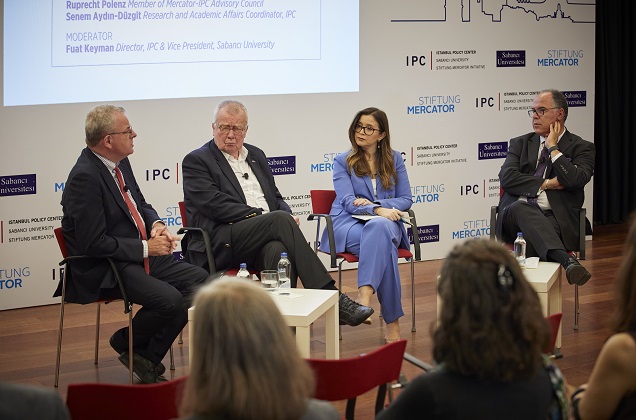 Andreas Nick, former member of the Council of Europe and 2022 Mercator-IPC Senior Fellow, pointed out that the Council of Europe is an excellent example of the institutional infrastructure built in Europe and that Turkey is one of the de facto founding members of the Council. Stating that it is necessary to focus more on existing ties and strengthen institutional ties in NATO and the Council of Europe in order to maintain healthy relations between Turkey and the EU, Nick emphasized the importance of building European integration organically at this level. Nick stated that these efforts need to be built on the foundation of the rule of law, democracy and the protection of human rights. He concluded by saying that if Europe is willing to accept that Turkey is and will remain an important regional power, the way out can be to create strategies that will be profitable and alliance-friendly for both sides, taking into account Turkey's interests and actions.

IPC Research and Academic Affairs Coordinator Senem Aydın-Düzgit started her speech by highlighting the change in Turkey-EU relations over the last ten years and said, “Although the negotiations continued in 2011, despite the slow progress, during this ten-year period, Turkey was first seen as a strategic partner rather than a candidate country, and then it began to be seen as a potential adversary. In the picture that emerged at the end of ten years, on the one hand, democratic and economic decline and violations of freedom were observed, on the other hand, economic partnerships and cooperation on the issue of migration continued. Aydın-Düzgit stated that a potential turning point is approaching for the future of westernization, which is one of the cornerstones of the republic, as the 100th anniversary of the Republic nears. Aydın-Düzgit said that at this point, issues such as the choices about how Turkey will organize state-society relations, the priority of fundamental freedoms, democracy, human rights, secularism, and women's rights will gain great importance. Aydın-Düzgit, who stated that she believes that there should be hope despite all these, listed the Turkish public, especially the younger generations seeing their future in Europe and considering Europe as a potential partner in the issue of climate change, among the sources of light necessary for this hope to flourish.

After the panel was concluded, Director of the Center for International Relations of Stiftung Mercator Anne Duncker presented her gifts to the audience after her speech emphasizing the importance of international understanding and partnership.

Sharing his views on the 10th Anniversary, Sabancı University President Yusuf Leblebici said, “Under the talented and visionary leadership of our esteemed faculty member Fuat Keyman, IPC has become a gold standard in policy research and social issues, and is now considered a reference source in many fields. The valuable contribution and support of Stiftung Mercator has clearly been instrumental in this success. At Sabancı University, we place great value on interdisciplinary research and have seen IPC as one of our shining stars for years. Our university has a very meaningful motto of creating and developing together. This is exactly what we are doing at IPC with the support of Stiftung Mercator and we aim to do many more productive pieces of work together.” The event ended after Özcan Mutlu's speech.