The 2021 Forum of the Switzerland-based ArtTech Foundation, which brings together international researchers, engineers and scientists in addition to prominent people from the world of culture, arts and economy was held at Sakıp Sabancı Museum in collaboration with Sabancı University. Delivering a speech at the event, President of Sabancı University Professor Yusuf Leblebici said that technology and the arts were two powerful forces re-shaping the world we lived in each day, and when the arts and technology came together, they also helped preserve cultural heritage and unearth richness. Patrick Aebischer, Chairman of ArtTech Foundation likened togetherness of technology and the arts to the ‘future of the new world’ 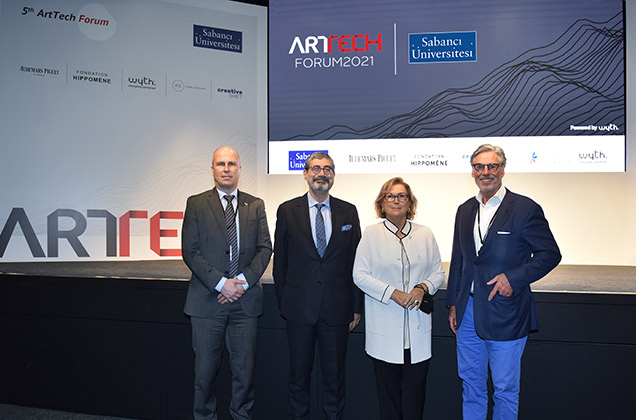 Sabancı University Sakıp Sabancı Museum hosted ArtTech 2021 Forum of the Switzerland-based ArtTech Foundation. Held in a hybrid way with the participation of international researchers, designers, authors, engineers and scientists, the forum included discussions on many topics including the role of technology in preservation of works of art in the long-term, how we could benefit from digital technology in cultural and artistic projects, and creation of digital archives of works of art. 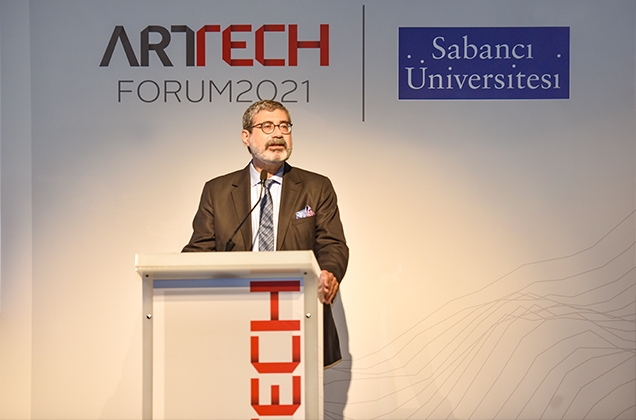 LEBLEBİCİ: AS A COUNTRY, WE POSSESS A MASSIVE FORTUNE IN CULTURE AND THE ARTS

During his speech, Sabancı University President Yusuf Leblebici said he was proud to host such an important and international event. He added, “As Sabancı University, we strive to raise awareness of cultural heritage and arts in our country, and help to develop and preserve the arts.” Highlighting that when the arts and technology came together, they helped preserve cultural heritage and unearth richness, Leblebici said the following: Technology and the arts are two powerful forces re-shaping the world we live in each day. They guide our minds to different realms through new discoveries and experiments, opening up new and exciting horizons. They also help preserve cultural heritage and unearth richness. During the panels to be held in this event, many important topics will be covered, from new technology models for protection of cultural heritage, to new structures in performing arts. And I believe that the discussions in this event will help us preserve our country’s historic and artistic heritage to be handed over to future generations. Throughout history, our country was home to many different civilizations, and also the meeting point of those civilizations. We possess a massive fortune from the Göbeklitepe site, dating back to 12 thousand years ago, which led to rewriting of human history, to our complete cultural heritage and all the works of art inspiring the whole world.

Aebischer: “WE AIM TO BRING THE ARTS TO MORE PEOPLE”

Pointing out that Sabancı University was an institution that aspired to build a bridge between technology and science, culture and the arts, Patrick Aebischer, Chairman of ArtTech Foundation said the following: Technology has assumed an increasingly important role in bringing people together with culture and the arts. Technology can also present to us new experiences about the arts. We aim to bring the arts to as many people as possible. Our ArtTech forums aim to do the same. Start-ups and initiatives are the key to this endeavor. Therefore, we have always invited very innovative enterprises that try to become big companies of the future to our Foundation and enabled many people to enjoy culture and the arts from the very beginning. ArtTech Foundation predicted this new world would be upon us. During the pandemic, we have realized how much we depended on technology tools.”

Brun: “We encourage the arts and culture to make the two countries get closer”

Roland Brun, Deputy Consul General of the Consulate General of Switzerland in Istanbul said that cooperation between Turkey and Switzerland, the 7th biggest foreign investor in Turkey had strengthened further in recent years. Brun said, “The two countries need closer cooperation and further exploitation of synergies that might arise. As the Consulate General, we do not seek synergies only in the field of business, technology, education or research. We also encourage the arts and culture in order to make the two countries get closer. And there are extraordinary places to do this in many cities in Turkey, to start with Istanbul.”

Metin Arditi, author, delivered a speech entitled “Why mixing culture with entrepreneurship makes a high-octane fuel”. He touched upon the relation between culture and entrepreneurship. He said the following: Culture is not knowledge, it is not about the facts, it is about sentiments and sharing those sentiments. Culture is not about knowing how to play an instrument, how to write a novel, but listening to a masterpiece, and getting enriched with the sentiments it presents. It is about sharing pain and pleasure of characters in a novel you read, and living their lives." Highlighting that the most important quality of culture was to provide people with a sense of humility, Arditi continued, "Why is this so important? Because success results in arrogance, and arrogance, in failure. A person who is always very successful cannot predict competition."

Director of Sakıp Sabancı Museum, Dr. Nazan Ölçer said the following as she invited Refik Anadol, the world-famous designer to the stage for his speech: “Anadol’s work has been featured at iconic landmarks, museums, and festivals worldwide. He has also received several awards and prizes. His work addresses the challenges and possibilities of what it means to be a human in the age of artificial intelligence and explores how our experience of time and space is evolving now that machines dominate every aspect of our daily lives. He invites his audiences to imagine alternate realities by redefining the functions of architectural elements, creating immersive environments that offer a dynamic new perception of space. Anadol’s site-specific three-dimensional data sculptures and paintings, live audio-visual performances, and immersive installations bring entire buildings to life, offering viewers a new perspective into their world.” 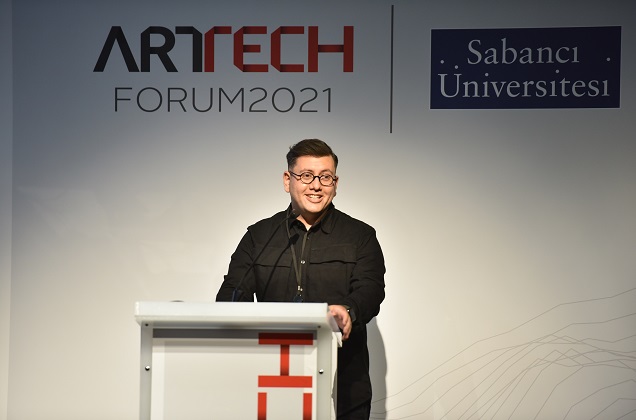 REFİK ANADOL: “THE ARTS SHOULD BE IN STREETS”

During his speech entitled “Creativity at the intersection of humans and machines”, Refik Anadol stated that he was deeply inspired by the works of William Gibson, author of the book Alien and said the following: “Technology has been at the center of our lives for centuries and it develops continuously. As a media artist, I can say that I was first inspired by many things, from the city I was born and grew up in, to the movies I saw as a child. I am truly excited by transposition of architectural structures to virtual reality, and elimination of boundaries of physical spaces and their re-dimensioning by using light and special production software. Visualizing elements like sound and light on top of physical materials with the help of technology to generate new dimensions in time became a new threshold for me and carried my work to a different level. As an artist, I was always thrilled to produce works that were based on the perception of ‘what is real and what is not’. In my opinion, the arts must be everywhere and open to everyone, in other words, the arts do not have to be confined to museums and buildings, they should be in streets. It is very inspiring to collect the data around us and transform it to art. As technology develops, it occupies a growing place in our lives, and machines play a big role in our lives.”

The first roundtable in the Forum was entitled “Trends and investment in cultural and creative industries”. It was moderated by Muriel Siki, journalist. The panelists included Ian Charles Stewart, co-founder of WiReD Magazine, and Vincent Borel, Vice-President of Logitech. The second roundtable was entitled “Heritage preservation and technologies, focus on Turkey and region” and moderated by Zaki Aslan, Director and Regional Representative of ICCROM for the Arab States. The panelists included Nurçin Kural, Conservation Laboratory Manager, Patrick Michel, Senior Lecturer at the University of Lausanne, Antonio Almagro, Professor at the Royal Academy of Fine Arts of San Fernando, Günce Pelin Öçgüden from the Department of Archeology and History of Art of Koç University, and Ertu Erbay , VRchitect from Metaxu.studio. 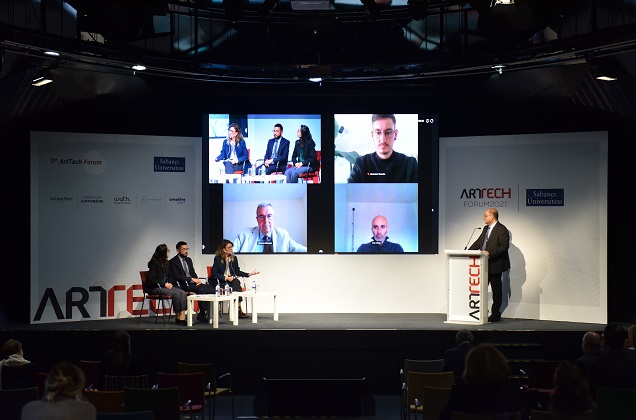 During the forum, 8 parallel sessions were held. The names of the sessions were “NFTs: A catalyst of change for the art market”, “ArtTech start-ups”, “XR opportunities in Turkey’s cultural sectors”, “New formats in cultural institutions”, “New formats in performing arts”, “Private and public funding for creative industries”, “How online is shaping the next generation of artistic creation, content and communities”, “Digital twin as a new canvas for cultural institutions – iart session”. One of the 8 start-ups that competed during the forum to develop their projects was presented 5th ArtTech Prize by an international jury.