In 2021, Renewable Energy is Slated to Reach Its Highest Share in the Energy Mix since the Industrial Revolution 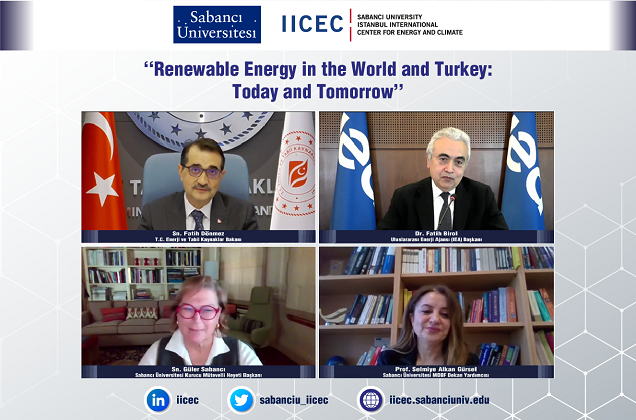 Sabancı University Istanbul International Center for Energy and Climate (IICEC) held a webinar titled “Renewable Energy in the World and Turkey: Today and Tomorrow”. The webinar was held with the participation of the Minister of Energy and Natural Resources Fatih Dönmez, Founding Chair of Sabancı University Board of Trustees Güler Sabancı, and Executive Director of International Energy Agency (IEA) Dr. Fatih Birol.

Moderated by Sabancı University Faculty of Engineering and Natural Sciences Deputy Dean Selmiye Alkan Gürsel, the webinar began with introductory remarks by Founding Chair of Sabancı University Board of Trustees Güler Sabancı, who said: “As the pandemic rages on, we must once again meet virtually. I believe that guided by science, the worst of our days will soon be over. The scientific approach and technology are the best tools we have to prepare for the present and future of the energy sector. Strategies, plans, investments, technologies, cooperation and exchange of information on empowering sustainability in economic, social and environmental matters are crucial at times of uncertainty such as this."

“We can see that the important developments will continue in important and complementary areas like security and diversity of energy supply, reducing import intensity, ensuring further competitiveness of the markets, improving efficiency in the energy supply and demand chain, and developing and disseminating energy technologies. Turkey achieved significant growth in electricity production from renewable energy. We have a firm position in Europe in terms of established renewable capacity. A perspective of growth in renewable energy, focusing on technology, will have great and varied benefits to security of supply, environmental performance, and opportunities for high-value industrialization.”

Emphasizing that energy and climate have long been priorities at Sabancı University, Güler Sabancı said, “We established IICEC 11 years ago as a tripartite thought center between the public sector, industry and academy to contribute to cleaner, safer, and better energy future for economic growth, social development and coming generations. I am delighted to see that IICEC's contribution to these objectives grows."

“This report was widely appreciated by industry stakeholders and received great feedback. 'Turkey Energy Outlook' met a crucial need in the Turkish energy sector and became a work of reference for all stakeholders. Another ambitious project by IICEC this year will be the 'Turkey Electric Vehicles Outlook'. This report will provide a comprehensive perspective into electric vehicles and the e-mobility ecosystem and growth potential in Turkey. IICEC will continue to contribute to a safer and cleaner energy future with pioneering work and exemplary outcomes."

Executive Director of International Energy Agency (IEA) Dr. Fatih Birol said that the pandemic had devastating effects in 2020 and shared key observations about 2021:

"The worst impact of the pandemic was on human health, of course. The global economy was also devastated. Every country was affected by the economic crisis. However, the outlook turned towards positive for 2021. An expectation emerged that people would be more involved in climate change or clean and sustainable energy in the wake of the pandemic. We took a cautious stance. We believe that energy policies, technologies and costs play just as great a role as human behaviour. We know what happened in the first three months of 2021 and we think that emissions will spike this year, becoming the second greatest spike in history. Europe, Japan, United States, China... many countries have committed to achieving zero emissions by 2050, so the expectation is that emissions will drop, but the actual figures show a widening gap between commitments and reality. The rate at which emissions increase is concerning for the climate."

“There is a silver lining to this dark picture: Renewable energy is growing across the world," said Dr. Fatih Birol, and continued: “In 2021, we believe that the share of renewable energy will reach 30% worldwide. This is the highest it has ever been since the Industrial Revolution. There are two reasons for this: one is incentives by the government. The second is declining costs. We expect the growth in renewable energy to increase even faster.” Saying that one of the key successes in Turkey's energy sector was the giant leap in renewable energy, Dr. Birol pointed out that Turkey had great potential for renewable energy.

RENEWABLE ENERGY IS IN ITS YOUTH IN TURKEY

The webinar’s keynote speaker was Minister of Energy and Natural Resources Fatih Dönmez, who said that the global economy was in a deep crisis due to Covid-19, adding "One of the few sectors that managed to grow in this chaotic environment was renewable energy. It wouldn't be entirely wrong to say that the renewable energy sector overcame the Covid-19 crisis. It developed antibodies against the disease caused by the crisis."

Emphasizing their objective to make Turkey a hub of research, development and innovation in energy technologies and turn energy into a high-value export item, Minister Dönmez said, "Renewable energy is in its youth in Turkey. It is a dynamic sector that grows with new stakeholders every day. In a global system where renewables and efficiency are key in energy production, we have to take our position accordingly."